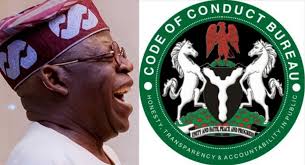 The Justice Minister, a guest on a Channels Television programme ‘Politics Today’ added that both the EFCC and the CCB have constitutional powers to act in accordance with the laws establishing them.

He posited that only Abdulrasheed Bawa, the EFCC chairman and his CCN counterpart can speak on the issue.

“The office of the Attorney-General as you rightly know has not filed any action before any court in the land relating to Asiwaju Bola Ahmed Tinubu. But then within the context of the law, as you rightly know, the EFCC and Code of Conduct Bureau are all statutory bodies that are vested with statutory powers to act within the context of the laws establishing them”.

“So, I am not in a position to give you a precise answer and I will suggest to you that you may consider inviting the chairman of EFCC or perhaps the chairman of Code of Conduct for elaborate answers associated with those charges if any has been filed by those agencies”.

“ I am not here in a representative capacity to speak for them neither in a defensive capacity for them. I will suggest you invite the heads of the agencies to shed more light”.

“But the office of the Attorney General and its arm which is the Director of Public Prosecution has not initiated any proceeding and no investigation has commenced at its instance from any of its agencies be it EFCC or Code of Conduct” he said.

End The Killing Of Farmers By Herdsmen, Ex-Chief Of Army Staff,...

We Attacked Governor Ortom, We Planned To Kill Him — Fulani...