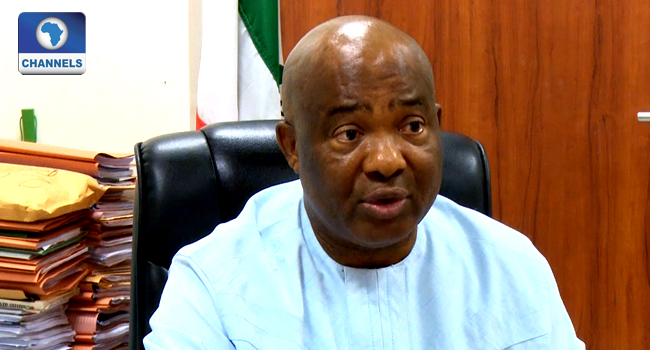 Imo State Governor, Senator Hope Uzodinma says no one can give him a tangible reason why the All Progressives Congress (APC) will not be reelected in the next general elections, Njenje Media News reports.

Speaking to reporters on Tuesday at the Presidential Villa after meeting with President Muhammadu Buhari, Governor Uzodinma challenged Nigerians to give reasons why the ruling party should not win the 2023 polls.

Uzodinma said President Muhammadu Buhari’s administration has performed well and should be applauded.

While responding to a question of whether more governors from the Southeast would defect to the APC, the governor said, “Not just from the South-east, many governors in Nigeria will join the APC”.

“Part of the problem of this government is the deliberate attempt by some group of people to pull (it) down.

“Because nobody is telling me that this government is not performing, that salaries are not being paid or that the roads are not being constructed or the railway is not going or the various intervention funds to empower our youths are not being given out.

“Nobody has come in concrete terms to accuse this government of one failure or the other. All we hear is that herdsmen and farmers are fighting and for that reason, 200 people are kidnapped. People are shot down there, people are killed there.

“What do you want the government to do? We must be realistic. I believe in pragmatism. I believe in doing things right. Can anybody come and tell me one, two, three, four reasons why this APC should not win in the next election?

Speaking on the crisis in Imo state, Governor Uzodinma called on fellow leaders to join hands to bring an end to the insecurity in the state, noting that himself alone cannot restore security.

He appealed to all stakeholders including traditional rulers, religious leaders, and politicians, to engage more with the issues in order to engender peace in the country.

He also stated that former political office holders who have failed to speak out against the security crisis in the country have questions to answer.

According to him, if all leaders speak out condemning perpetrators of insecurity, a lot of changes would be visible.

“Anybody worth his onions as a leader should be able to speak out. How many of them are speaking out.

“How many of them are condemning what is going on. rather what you see is leaders fanning the embers of insecurity, the governor said.

He also stated that anyone found culpable in the destruction of government property would be made to face the full wrath of the law.

Alaafin Expresses Sadness Over Igangan Killings, Calls For Use Of Native...