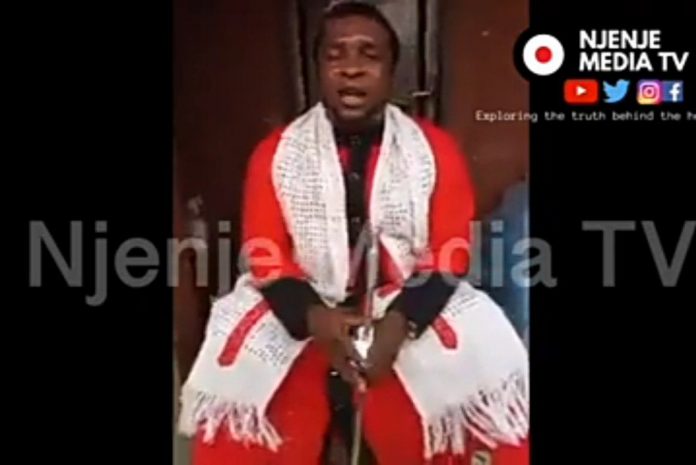 The Founder of Children of Light Anointing Ministries, Nkpor, Anambra State, Onyebuchi Okocha who calls himself ‘Onyeze Jesus’ has been arrested by the Police in Anambra State.

He was reportedly arrested on Wednesday, January 27, 2021 and a source told Anambra State Broadcasting Service that he would likely be arraigned today the 28th of January 2021.

Njenje Media News reports that the Anambra State Government had earlier through a statement by Mr Adinuba, the State Information Commissioner warned Onyeze Jesus against what it termed ‘criminal and indecent conduct in the name of religion’.

This was followed by a statement by Anambra State Ministry of Heath wherein Hospitals and mortuaries in Anambra State were warned not to allow Onyeze Jesus access to their facilities to carry out his planned magic to resurrect 7 corpses in the State.

Njenje Media News recalls that Onyeze Jesus had released series of videos parading people dancing naked in a river indecently, showing an abuse of the Nigerian currency, his get-rich-quick promises to youths, an action which made Njenje Media CEO, Maazi Ezeoke release a video message calling on the Anambra State Government to investigate and possibly prosecute the pastor.

The video had attracted criticism of Nigerians who felt dismayed by such public act of indecency. He later on apologized in a video for his actions.

RELATED POSTS:  Gay Nurse Suspended For Stripping Off PPE To Make Out With COVID-19 Infested Man In Hospital Toilet