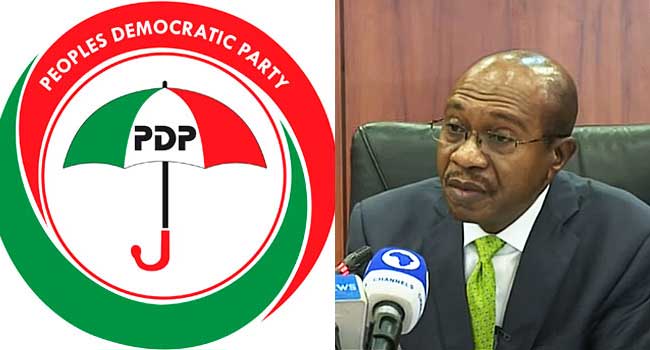 The Peoples Democratic Party (PDP) has called for the probe, arrest and prosecution of the Central Bank of Nigeria (CBN) Governor, Godwin Emefiele, over the purchase of the N100m presidential form, NjenjeMediaNews reports. Speaking during a press conference in Abuja on Saturday, the PDP National Publicity Secretary, Debo Ologunagbo said Emefiele cannot continue to resume as CBN governor having purportedly joined partisan politics.

He described Emefiele’s continued stay in office as one that is unhealthy for the nation’s financial regulatory sector, calling on the anti-graft agencies to beam its searchlight on the CBN governor.

“Now that Mr Emefiele has joined politics and reportedly obtained the N100 million presidential aspirant form from the APC, he cannot continue to resume at the CBN which is the commonwealth of our nation,” the PDP spokesman said.

“Mr. Emefiele’s involvement in partisan politics while still holding office as CBN Governor underpins the impunity, lawlessness and recklessness of the Muhammadu Buhari-led APC administration. It further confirms that the CBN under Emefiele has all along been the finance department of the APC.

“I stand with Nigerians in demanding the immediate arrest, investigation and prosecution of Emefiele by security and anti-graft agencies, particularly the EFCC for alleged financial malfeasance and abuse of office in the CBN under his watch.”

Emefiele reportedly picked up the expression of interest and nomination forms of the All Progressives Congress (APC) for the 2023 elections.

The N100 million form was picked up on behalf of the CBN Governor by a group of supporters from the party’s organising secretary at the International Conference Centre (ICC) in Abuja, on Friday morning.

There had been speculations that the Central Bank Governor was interested in vying for the Presidency in 2023 with campaign banners flooding parts of the country.