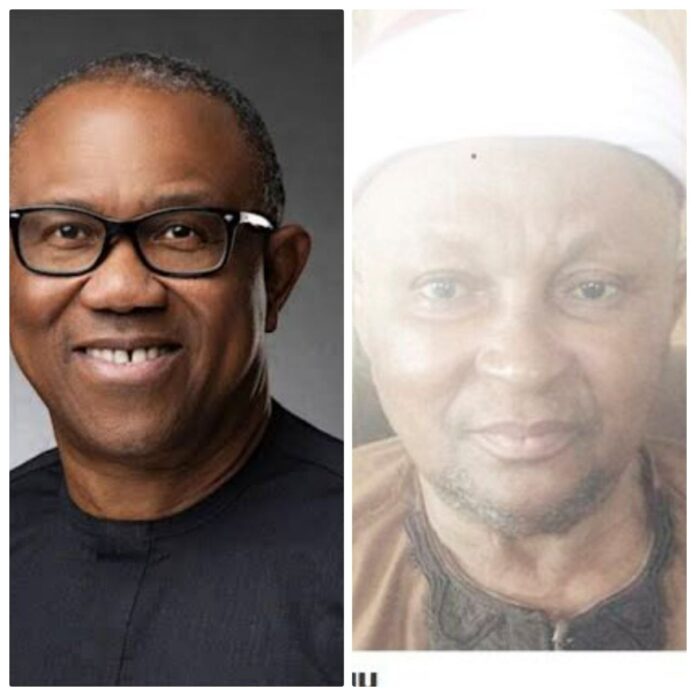 The Seriki, Hausa Community in Onitsha and the Anambra North Senatorial District, Alhaji Iliyasu Yushau has debunked claims that the Presidential Candidate of the Labor Party in the 2023 Presidential polls, Mr. Peter Obi demolished some mosques in Anambra State when he held sway as the State Chief Executive.
Njenje Media News reports that the Hausa Community Leader made this known in an interview with the Sun News Online. According to the Seriki, the former Anambra State Governor had a good working relationship with the Hausa Community and the Muslims in the State, even as he advised Nigerians to be wary of fake news as it can cause serious problems in the country.
In his words:
“For Peter Obi and mosque issue, of course that is not true. We had a good relationship with him as governor but this interview is not about him. On a very good day, we shall address that. For fake news and hate speech, I advise people to avoid such because it is just embarrassing. We don’t want fake news or hate speech because that one can cause problem in this country. Those who are doing this, they should desist because we need peace in this country. Everyone should campaign for his own party or candidate instead of hating other parties.”
Yushau further noted that all the previous governments in Anambra State starting even from the military to the civilian have always accorded the Arewa Community hands of fellowship.
“My people have always been obedient because they don’t have problem with anybody. During elections as such, I used to warn my people that they should be law abiding citizens and should choose the political party of their own interest. I’m not forcing anybody because I’m a traditional title holder. All the political parties are my own and they used to come and I will bless them and wish them good luck. I am not partial and I don’t take sides among politicians. During elections, I also tell my people to stay here and cast their votes instead of moving to the North. Even in the North, Kano to be precise, the Chairman of Ohanaeze Ndigbo is my friend and we used to have contacts with them and we share information because they live in my state-Kano peacefully and other Northern parts of the country. All the governors in Anambra have always tried to foster peace among everyone in the state. From Ngige, Obi, Obiano and even the present Governor Soludo, we support his administration and he has assured us that peace must reign in Anambra State”, he said.

While referencing the youth of the country, he said:
“Nigerian youths and even the elders know what is good and what we want. We need security, economy and infrastructure in Nigeria. Banditry, kidnapping and terrorism should stop and government should try more in this direction. People should be free to go to any part of this country without fear. I’m from Kano State but I’m free here in Onitsha. Where am I running to? I’m satisfied with my living here and this is my country Nigeria. I wish Anambra and Nigeria in general good luck.”
The Seriki on his message to the Arewa people domiciled in Anambra State advised them to live peacefully in their present domain and also obey the electoral act.
“Everybody has his own choice. I cannot tell them whom they should vote for but they should make their personal choices because all the presidential candidates are Nigerians. None of them is from a foreign country and there is no way for rigging this time. The election will be free, fair and credible this time.”