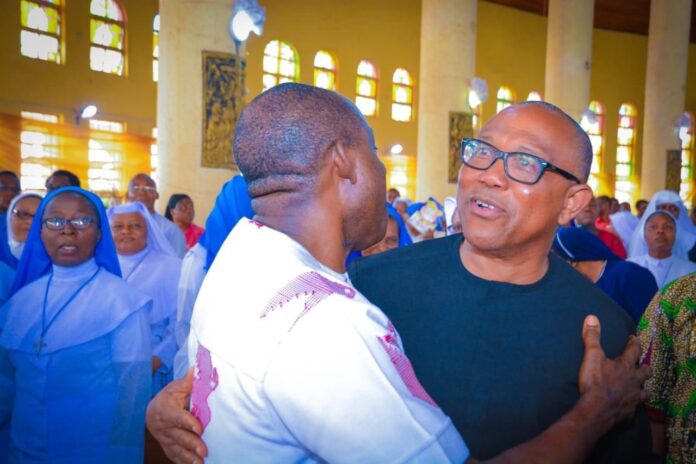 The presidential candidate of the Labour Party, Peter Obi, and the governor of Anambra State, Prof Charles Soludo, on Thursday, met at Awka, the Anambra State capital, NjenjeMediaNews reports.

The duo who met at the Thanksgiving mass for Most Rev. Paulinus C. Ezeokafor in celebration of his 70th birthday were seen embracing each other while exchanging pleasantries.

This is coming amid the knocks that trailed the comments of Governor Soludo over Obi’s presidential ambition.

Recall that during a ChannelsTV interview with Seun Okinbaloye, Governor Soludo had said that Obi’s investment in the state when he was the governor was worth “next to nothing” now.

He followed up with an article titled, “History Beckons and I will not be Silent (Part 1)” dismissing Obi’s chance of winning the 2023 presidential election.

Although, many are not expecting to see the two reunite anytime soon as several comments from Obi supporters labelled the Anambra governor as a traitor and one who “needs to focus on governance”.