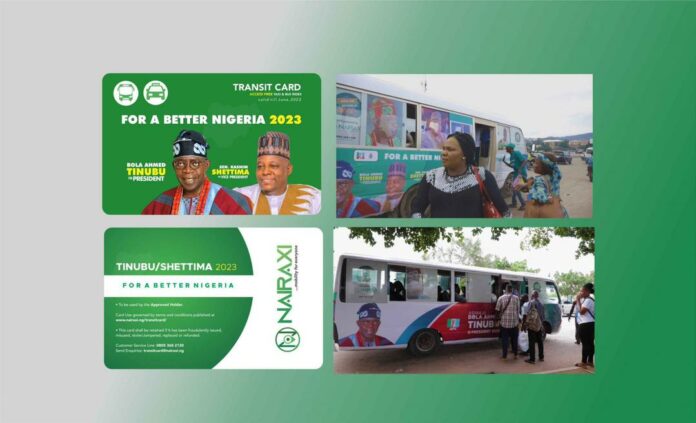 Million of Nigerians are currently being registered as the Tinubu/Shettima-NAIRAXI Transit Card Initiative opens portal.

The Tinubu/Shettima-NAIRAXI Transit Card Initiative commenced the registration of interested Nigerians who are willing and interested in the free/subsidized transportation scheme, an intervention to reduce the growing cost of transportation in Nigeria.

Registration commenced few days ago when the official portal was shared and officially opened for interested Nigerians. According to our source, the registration is free and only requires a seamless process.

@sunday_phemy’s tweet, which reads “this is a taste of how governance will be simplified under BAT. They are busy cooking their lies and insults while Tinubu is busy strategizing on how he will govern well”

Another @Bode Maxwell tweets,”These people are just bringing the bird out of their pockets. By the time they are done you’ll realize there was never a contest in the first place. May Tinubu/Shettima succeed”

@Shewn also tweeted “We will enjoy and still vote them. If a presidential ticket can come up with this innovative idea for their campaign then I am sure they have more to offer than the normal politicians who eat roasted corn on the street with d masses”.

The program has been designed to benefit Nigerians, although, several persons are of the opinion that it was a strategy for vote buying, while others understands that the free transportation scheme was instead a strategy adopted to reach out to the grassroots but will appreciate if the scheme can be extended beyond elections since Solving a critical need which affects every Nigerian household. Note that after cost of housing the next most expensive item is transportation. So solving this is quite commendable and points to the forward thinking nature of his Excellencies.

“The Tinubu/Shettima-NAIRAXI Transit Card Initiative is a self sustaining program for Nigerians developed by indigenous smart mobility company NAIRAXI with a simple goal of ameliorating the projected effects of the planned removal of fuel subsidy come June, 2023.