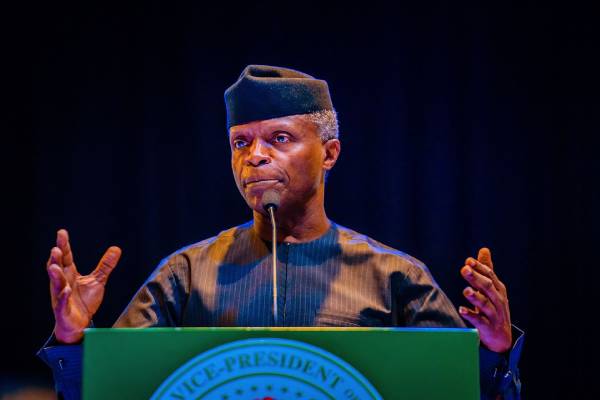 The banking and finance sector has over the years played significant roles in the economy, but emerging challenges require that the sector takes on more transformative projects such as housing and renewable energy, among others, in ways that significantly impact job creation and poverty reduction, according to Vice President Yemi Osinbajo, SAN.

Njenje Media News reports that Prof. Osinbajo stated this today in Abuja at the opening session of the 14th Annual Banking and Finance Conference themed “Economic Recovery, Inclusion, and Transformation, the role of Banking and Finance”. President Muhammadu Buhari had earlier declared the conference opened and his Rwandan counterpart, Paul Kagame also delivered the keynote address.

In their separate remarks, Presidents Buhari and Kagame commended leaders in Nigeria’s banking and finance sector for their contributions to the development of Africa’s economy. President Buhari specifically urged the sector to support his administration’s efforts in job creation and poverty alleviation, listing some of government’s achievements in the areas.

According to the Vice President, “it is time for the sector to take on some of the transformative big-ticket items that would fundamentally transform our economy. Such matters include consumer finance but housing finance in particular.”

He noted that a focus on how to finance housing is critical.

“That study (AfDB survey) says for example that the benefits of housing for individuals accrue in large part through better health and sanitation, and of course this improves the overall human capacity of our citizens who are able to own these houses. Housing also generates large multiplier effects in terms of employment and output. Employment is created for both skilled and poorer, unskilled workers.

“The evidence also suggests that there is a symbiotic relationship between housing finance and financial sector development. Housing finance helps to develop the financial sector itself and helps to contribute to economic growth. So, these were the justifications that we also advanced for our mass housing initiative in the Economic Sustainability Plan.”

Challenging the banking sector on participating in the Federal Government’s Mass Housing programme, the VP noted that “the finance sector appears shy or simply has not found the right housing finance model that will work.”

He explained that “the challenge of under-electrification of the rural and poor and it’s associated impacts on our economic well-being and security cannot be overstated. The climate change challenge is a massive one in more ways than we can imagine.

While commending the sector for its efforts in improving service delivery over the years, the VP noted that “going forward, the banking and finance sector must take advantage of the new opportunities that are opening up and also adapt to domestic and international developments.

Prof. Osinbajo also suggested that financial inclusion being critical to the objectives of recovery, inclusion and transformation, should be prioritized “especially in this COVID era, for the poor and more vulnerable sections of society so that they can keep their micro-businesses alive and handle risks and uncertainty.”

Other dignitaries who spoke at the event include Governor Babajide Sanwo-Olu of Lagos State; Governor of the Central Bank of Nigeria, Godwin Emefiele, and President of the Chartered Institute of Bankers (CIBN), Mr. Bayo Olugbemi, among other bank executives across the country with several participants also joining virtually.