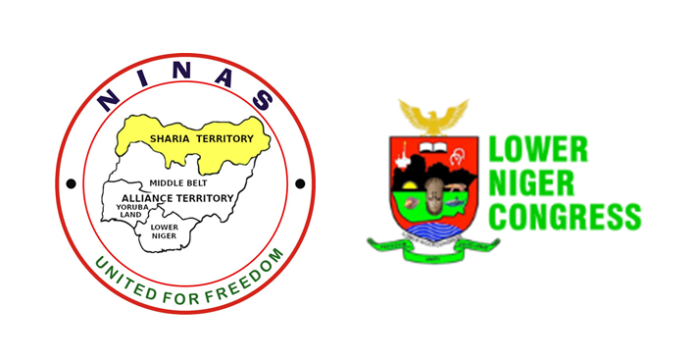 The attention of the LNC and the NINAS Secretariat has been drawn to news making the rounds on social media about the IPOB/ESN shutting down Elections in Igbo Land.

This would have been a most welcome development but for the attempt by whichever faction of IPOB peddling that story, to link the Elections shutdown undertaking to the totally meaningless “Biafra Restoration” campaign and the agitation to free their detained Leader.

The public is by this Note of Clarification, invited to NOTE that the suspension or halting of further National Elections under the 1999 Constitution as prescribed and being pursued by the LNC and its NINAS Allies is for the ENTIRE Alliance Territory being the South and Middle Belt, (not just Igboland).

More importantly, the electoral shutdown undertaking is for the strategic purpose of Taking Down the 1999 Constitution and therefore precipitating the Transitioning that will midwife the Regional Self-Determination Referendums by which the trapped constituent components of the distressed Nigerian Federation shall determine their Political Future.

It is pertinent to note that much as all who believe in the LNC-NINAS Grand Script are welcome to participate in the implementation processes in their various Blocs, it has to be strictly within the Template and Operational Modalities dictated by the LNC-NINAS Grand Script especially as encapsulated by the December 16, 2020, Constitutional Force Majeure Proclamation of the Nigerian Indigenous Nationalities Alliance for Self-Determination (NINAS).

It is in the context of this clarification that it has become necessary to inform the public THAT the IPOB/ESN elements who in the Igbo space, are now attempting to inject themselves and their campaign to free their detained leader, into the much wider and purpose-driven elections shutdown undertaking, ARE NOT doing so within or on behalf of the LNC-NINAS Grand Script, especially for the known methods of IPOB/ESN which the LNC and its NINAS Allies have for many years been publicly and totally opposed to.

IPOB’s current attempt is no more than their trademark-desperation to take credit for things they know nothing about, oftentimes causing damage, distortions, and setbacks to the substantive undertaking.

One example of this crude credit-seeking and dishonest distortions was where the IPOB misread the National Elections Shutdown propositions of the LNC-NINAS and so ran off with an ill-thought-out Boycott of the Anambra State elections. The blood-cost and disruptive outcomes of that misadventure, both in the 2017 round (Python Dance) and the 2022 round are still fresh in public memory.

Another example of stealing ill-digested ideas for credit-seeking purposes was the quiet international engagements and undertakings of the LNC and its NINAS Allies, especially in thePolicy Beltways of Washington DC and at the UN in New York, between 2015 and 2019. The IPOB propaganda machinery went on a photo-shopping spree to create the impression that it was meeting with officials of the US Government and the UN; in the process, noisily distorting and almost bastardizing what was painstakingly designed by the LNC and its NINAS Allies to be a shock-treatment for the recalcitrant Caliphate Nigeria.

The undeserved disgrace brought by IPOB on the NINASLiberation Project in the International Circuit and the blood-cost to the homeland amongst the hoodwinked multitudes are still fresh in public memory.

The purpose of this Public Note of Clarification is to invite the vigilance of the general public in what might soon be another episode of distortions that would result in avoidable bloodletting in Igbo Land just because the proprietors of the Rogue Biafra Franchise seek to inject themselves into an undertaking they lack the discipline and honesty to understand.