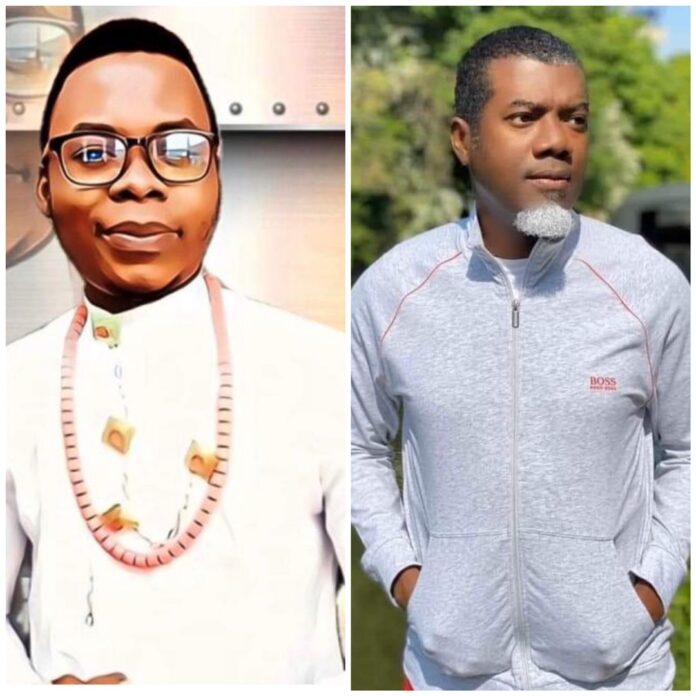 You deleted my comment and blocked me from commenting on your Facebook page cos I told you that your nugget is now lacking maggi.

Why did I say that?

You boasted that Itshekiri had Igbo slaves centuries before the British colonization..

According to you, after the British banned slavery, you Itshekiri people were forced to set them free. Some returned to Igbo land, others remained with you and gradually formed a new language called **** (you can’t mention) About 200,000 of them are still with you.

Reno, you went further as a Harvard-Oxford historian you are to say: “I will not reveal the name of this tribe called ****, because I do not want to offend them, but they are in Delta State)”.

You said also: if they speak, Igbo, Bini, Itshekiri and Portuguese will understand them too. You said they have names like Iweka, Ikenna. You claimed that is how some of your names and also Benin went into the Igbo lexicon.

You also said because of the sheer number of Igbo slaves you sold at Ogidigben, the Portuguese named the town Escravos.

Reno, I know that you know it all from politics, religion, social life, relationship, everything about life, God is learning from you because you know it all, that’s why you dislike dissenting opinion.

I am not here for attack, but historical reasoning. First of all, I want to ask you questions:

What century did the Itshekiri started having Igbo as slaves? When exactly? Oh you said centuries.

From your bogus writeup that lacks academic and historical substance, you claimed your people interacted with the Portuguese perhaps in the slave business.

Reno, the first time the Portuguese came to Nigeria was in the 15th century. They started trading brass and copper, pepper, cloth, ivory. In the1490s a Portuguese trader wrote that at Benin, copper bracelets were more highly prized than brass ones.

It was later, when the slave trade became norm in other African countries that the Portuguese involved themselves into that. Their initial arrival was purely for business. They did business with Igbo, Bini and others.

Again, those captured as slaves were sent to new world. Bonny was the settlement before taking off. There was a Calabar shore. This was when the British was already here. Itshekiri is out of the picture.

I am yet to see any researcher who is afraid to mention names of a people he is writing about because he doesn’t want to offend them.

You claimed that Igbo slaves the Itshekiri had formed their own language. According to you, the name of the language is . I know you are well educated and read more than everyone in the world, since when has name of a language turned to ?

Why are you afraid of mentioning the name of the language they formed while living in Itshekiri, after being freed as slaves? That is the height of your intellectual dishonesty. If you really know what you are saying, you will not shy away from mentioning the name.

I studied Linguistics, and historical linguistics is one of my best area of interest. New language cannot just be formed like that. That leads us to one of the macro Linguistics known as sociolinguistics. There must be language contact. Interaction with people around will affect the language of the people. If really they were Igbo slaves freed by the Itshekiris according to your soured nuggets gbara ụka, why are they not speaking Itshekiri but had to form their language which is not Igbo, but a different language entirely?

In your second claim, you said about 200,000 are still with you. The question is, where are they located in Itshekiri land? Who are they? You can’t tell us, Mr. I Know All. You are using *

Reno, the Igbo in Equitorial Guinea still retain some aspect of Igbo culture and language despite the influence of the tribes around them, how come the Igbo slaves in Itshekiri here, not up to 4 hours from Asaba had forgotten everything about their Igbonness despite having Igbo scattered everywhere and doing businesses in Delta? Isn’t that laughable?

Reno, you said you are not going to mention names of the tribe of Igbo who were Itshekiri ex-slave because you don’t want to offend them. Haba…Every society has dark age. What are you hiding? Because you know you just talk many times without thinking or carry out research cos you know that many you can deceive with your unmaggi nugget will think you are saying the truth without knowing that your nugget has lacked intellectual nutrients. Call the name of the Igbo tribe in Delta or anywhere in Igbo land that was Itshekiri ex-slave, you guys freed them after the abolition of slave trade.

From those posts of yours, you claimed that Jaja of Opobo was bought by the Ijaw and they made him king.

Should I burst your bubble?

It was Obua Ajukwu of Oguta who took Jaja from Ụmụduruọha, Amaigbo now in Imo State to Bonny when he was 12. The slavery he was taken to was apprenticeship type. He earned his way out of it. He rolled with the Ijaw and was enculturated according to the Ijaw rituals and subsequently rose to head the Anna Pepple House merchant fraction of Bonny Island.

As he was leading, they took over the trade in the Bonny region until there was a dispute with the Manilla Pepple House led by Oko Jumbo.

In 1869, he formed Opobo which was later known as a Kingdom trading the highest palm oil courtesy of Jaja. This brought attention of the British government to enlist it under their British Territory. He blocked access for the British to monopolize the market. Berlin Conference of 1884 forcefully designated Opobo as British territory.

Dear Reno, Ijaw did not make Jaja of Opobo king neither did they buy him as slave as you claimed. He formed a kingdom of Opobo about 26 miles away from east of Bonny.

Before you respond, go read up about the pre-colonial Igbo society from the notable world renowned historians—Professor Elizabeth Isichei, Professor Ọnwụejeọgwụ, Professor Kenneth Dike, Professor A. Afigbo and many more.

Then go read up “Among the Ibos of Nigeria”, by. G.T. Basden. Professor Elizabeth Isichei is a white woman, married to Igbo. Professor Kenneth is the first Professor of history in Nigeria and the first black Vice Chancellor of the University College, Ibadan.

Reno, I ask again, when has a name of people and language turn to *?

You think history is about PDP and APC where you can use any propaganda to pass anything. You think it is about a political and societal criticism. You think it’s about giving daily Bible quotes and unsolicited relationship and marriage advice with your insulting attitudes.

Dear Reno, I have cleared my conscience. You can now go ahead and block me on Twitter just as you did on Facebook. That is how intellectual co.wards behave. If you wish to, I am ready for open debate on pre-colonial Igbo history. Let’s do this.

This is not about noisemaking. You wake up every morning to have opinion over what you know and what you don’t know. I am not taking this personal. Not because you blocked me. But because I want to clear the air and state obviously that if you are not mentioning the names of the so called Igbo ex-Itshekiri tribe who now live among you with population of 200,000, form their own language, live in Igbo land and Delta, then you are telling the world how a world renowned notorious liar you are.

Block button is there, do your thing. Don’t expect silence when you decide to sell false narratives about the Igbo. The time of silence has gone.

I am still waiting for your response. I recommend also, buy more Maggi for your nuggets because it’s really lacking condiments.

Reno, I challenge you for open debate on this topic.

But before then, mention names of those your Igbo ex-slaves and the language they formed. Tell us the data you used to carry out your research that 200,000 of them still live amongst your people. What is even the population of Itshekiri?

If you are unable to do this, I’m sorry, I can’t take you serious. I paused.