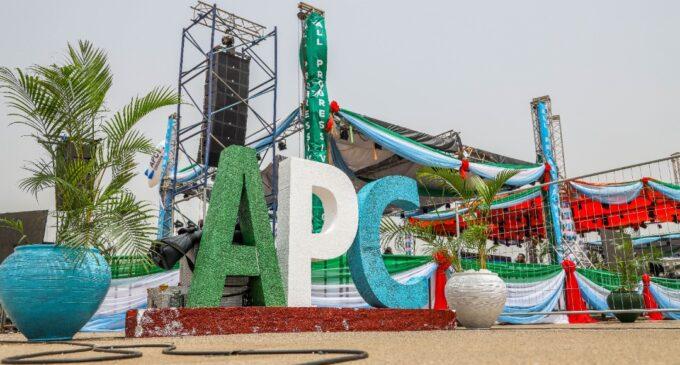 Few hours to the commencement of the All Progressives Congress, APC’s Presidential Convention, accreditation of delegates is going on at a snail’s speed despite the presence of legion of them at the International Conference Centre, Abuja, venue of the exercise.

Although, the delegates queued up according to their states, gaining entrance into the main hall for the exercise is proving difficult as they push one another back and forth.

A delegate who simply identified himself as Tayo without disclosing his state of origin blamed the development on a “lack of organization.”

He said: “We have been here since 8 A.M and only delegates from three states have been accredited. This is due to lack of organization. When are they going to round up today because they still have 33 states and the Federal Capital Territory, FCT, to do.

“If they don’t speed up this process, we may not be able to vote at the convention and if we don’t have a consensus candidate, the party will be in trouble if delegates are unable to vote. And we can’t vote without accreditation.”

Our correspondent learnt than the strange accreditation process adopted as against the usual practice of accrediting states in alphabetical order is partly to blame for the slow pace of the process.

As at the time of filing this report, only delegates from Benue, Ogun and Lagos states had been successfully accredited. Delegates from Edo states are currently being attended to.

Meanwhile, men of the Nigerian Police Force had their hands full with the activities of criminals at the venue as two pickpockets were napped for allegedly stealing an unspecified amount of money.

A total of 2, 340 delegates are expected to cast their vote to determine the Presidential flag bearer of the party in the 2023 election.