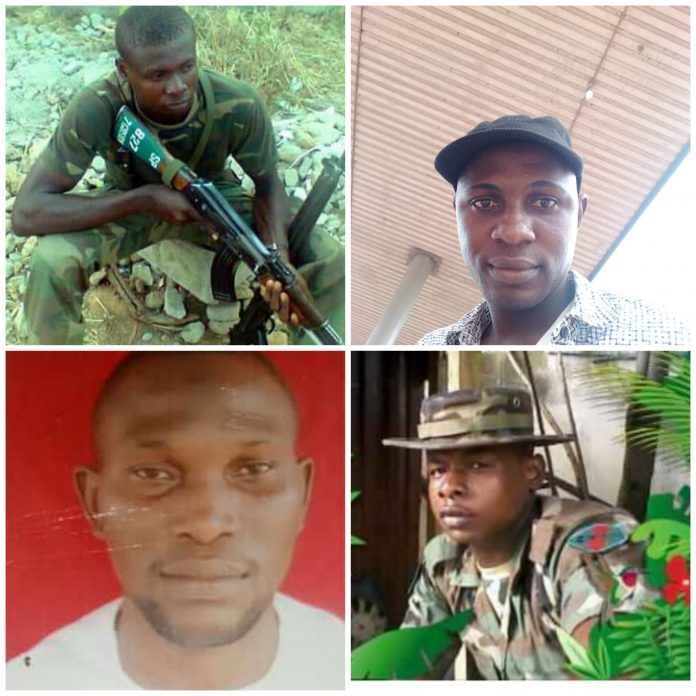 …seeks their declaration as persona non-gratae anywhere in the world and life jail for atrocities against unarmed Igbos & Others.

We, the undersigned human rights and intelligentsia coalition of old Eastern Nigeria origin, working toward redressing abuses and violations of human rights of grievous nature as defined by int’l instruments have today resolved to launch local and int’l justice campaigns against the immediate past Nigerian Army Chief, Retired Lt Gen Tukur Yusuf Buratai and over 20 others concerning their atrocious rights abuses while in office. The referenced int’l justice campaigns specifically border on justice for the victims of the horrendous rights abuses and violations and the severe punishment of their perpetrators. The chief perpetrator in this regard is immediate past Army Chief, Retired Lt Gen Tukur Yusuf Buratai. Others in the list are senior serving and retired military and police chiefs, as well as the Govs of Anambra and Abia States; all numbering over 20.

We have received with rude shock and deepest dismay the Monday, 25th Jan 2021 secret execution of six Igbo Christian soldiers, attached to the Armory Department of the Nigerian Army, Abacha Barracks in Abuja. The slain Igbo Christian soldiers; namely: Prince Ukwuoma, son of a traditional ruler; Ebube Isaiah, Amos Azubuike, Ekene Ebere, Moses Anyim and Godwin Uchendu were secretly executed under the instruction of now Retired Lt Gen Tukur Yusuf Buratai, a day before he left office on Tuesday, 26th Jan 2021. This shocking news was disclosed to us by Barr E.R. Okoroafor, an int’l human rights lawyer, who is very conversant with the matter and was also contacted by one of the slain soldiers through his family to defend them in the trumped up charges, executed using hazy and clandestine Military Court Martial.

According to the int’l rights lawyer, “sometime in Sept 2020, an allegation of missing weapons was made at Abacha Barracks and it was immediately traced to a senior Colonel of Fulani-Hausa Muslim origin and instead of the COAS to issue query and sanction the Colonel, he exonerated him on the grounds of his tribe and religion. The COAS turned around and ordered for the arrest of 12 soldiers guarding the armory, comprising six Igbo soldiers, three Yoruba soldiers and three Fulani-Hausa Muslim soldiers. In the end, the latter soldiers were shielded and exonerated under questionable circumstances and the six Igbo soldiers made to face secret court martial during which they were blocked and prevented from having access to their families and defense lawyers of their choice”.

Barr E.R. Okoroafor also told the Coalition that his attempts to stand in for the Igbo soldiers were stiffly opposed and he was flimsily told by the Army’s Legal Department that “civilian lawyers are not allowed to defend the accused soldiers except military lawyers”. Their trial was totally shrouded in secrecy and never disclosed to the public through Army statements till date; likewise their constitutional right of appeal to Court of Appeal and Supreme Court which was also totally denied. The persecuted and executed soldiers protested their innocence to the point of tendering their resignation in protest; all to no avail.

Apart from their secret execution being totally despicable and condemnable and a clear case of ethnic cleansing, the Coalition also strongly suspects that the six Igbo soldiers were framed or singled out for persecution on the grounds of their ethnicity and religion. It is also doubtful whether the offense of ‘missing weapons’ in peace time is commensurable with death sentence in the Nigerian Military laws, all subject to the provisions of the 1999 Constitution as amended. Another shocking part was where the immediate past Army Chief derived his power to order for secret execution of “justly” and “unjustly” convicted soldiers. This is more so when there is a national moratorium on death penalty in Nigeria. The Coalition therefore notes further that dozens, if not hundreds of Igbo soldiers have in recent times particularly since 2017/8 died under similar circumstances both in battle fronts and ‘peace time’. Additionally, there have been several reported and unreported cases of dismissals, resignations and desertions involving soldiers and officers of old Eastern Nigeria extraction on account of the ethnic cleansing under Buratai as Nigerian Army Chief.

According to facts available at Intersociety, hundreds of defenseless Obigbo residents are still missing or unaccounted for more than three months after their abduction by the Nigerian Army under Lt Gen Tukur Buratai (as he then was). A total of over 400 Obigbo residents had gone missing between late Oct and second week of Nov 2020 after the Army invasion of Obigbo and its environs on 21st Oct 2020; out of which 52 were rescued and freed in Niger State. Total of 93 others have so far been rescued and freed in Abuja. As it stands, 63 more names have been traced to different Army secret detention facilities in Abuja and at least three have been confirmed killed in Army detention among hundreds of those still being held captive and incommunicado in secret military locations..

· It is our strong recommendation that the named perpetrators especially Retired Lt Gen Tukur Buratai must face prosecution and life jail at ICC or in national courts in any foreign country operating int’l criminal jurisdictions on crimes of genocide, crimes against humanity and war crimes.

· Members of the international community especially the western democracies and the UN as well as international human rights organizations and institutions are particularly called upon to take diplomatic and advocacy notice of the named perpetrators and their atrocity crimes. This is for purpose of holding them judicially accountable and ensuring that they end up being int’l pariahs.

· The int’l Governments and Intergovernmental agencies should ensure that the perpetrators are declared “persona non gratae” including slamming them with appropriate international sanctions.

· Sanctions against them should include making them ineligible in all regional and international military, policing and other security or diplomatic engagements especially those involving corporate and individual or intergovernmental consultancies, contracts, partnerships, exchange visits, awards, presentations, board or institution appointments, holidays, etc.

· Other non judicial sanctions being recommended against the perpetrators include denying them and their family members visas, freezing their accounts and seizing or confiscating their assets abroad, etc.

· It is also our expert information that the perpetrators especially Lt Gen Tukur Buratai can be arrested and taken into custody in foreign land and criminally charged through the instruments of municipal, active personality, passive personality and universal or international criminal jurisdictions or be sued through the instruments of civil claimant litigations, etc.

The Nigerian Government is a monumental failure in terms of keeping with its regional and int’l human rights and humanitarian obligations or commitments. The grievous rights abuses and violations by the Government and its security chiefs include those provided and clearly defined in various international instruments with ‘justiciable binding effects’. Among them are crimes of genocide defined by the Article 6 of the Rome Statute; crimes against humanity defined by the Article 7 and war crimes defined by the Article 8 of the same Rome Statute of the Int’l Criminal Court. The Rome Statute was internationally enacted in 1998 and entered into force in 2001. Nigeria signed and ratified it on 27th Sept 2001.

Nigeria is also signatory to the Genocide Convention of 1948, Geneva Conventions or Laws of War of 1949 and its Protocols and Rules of Engagement (Jus In Bellum, Jus Ad Bellum and Jus Post Bellum) and Use of Force and Proportionality of same. Signed and ratified by Nigeria, too, with binding effects are the African Charter on Human & Peoples Rights (including Right to Self Determination via non armed resistance) of 1981; Int’l Covenants on Civil & Political Rights and Economic, Social & Cultural Rights of 1976; Convention against Enforced Disappearances of 2009 and Convention against Torture of 1985. These sets of int’l crimes are also prohibited by the country’s grundnorm or the 1999 Constitution; majorly categorized by the country’s body of criminal laws into: ‘crimes against persons’ and ‘crimes against properties’.

International Prohibited Acts: These include: murder, extermination, enslavement, deportation or forcible transfer of population, unlawful imprisonment, unlawful killings, unlawful executions, abduction of slain victims’ bodies, extrajudicial killings, sexual violence, torture, persecution against an identifiable group on the grounds of tribe/ethnicity and religion, enforced disappearance of persons, the crime of apartheid and other inhumane acts of a similar character intentionally causing great suffering, or serious injury to body or to mental or physical health.

Not only that many, if not most of the heinous crimes highlighted above were grisly perpetrated in Nigeria when Retired Lt Gen Tukur Yusuf Buratai held sway as the country’s Army Chief, but there was also zero accountability as they were swept under the carpet till date by the authorities; thereby breaching the Rome Statute’s ‘Principle of Complimentarity & Zero Impunity’. Under Retired Lt Gen Tukur Yusuf Buratai as Nigeria’s Army Chief, according to grounded statistics provided by the Int’l Society for Civil Liberties & Rule of Law; a highly respected research and investigative advocacy group monitoring the grievous crimes and their perpetrators since 2015; the following 19 massacres and related others have taken place with none of the perpetrators brought to justice till date.

The rest are: (12) 29th and 30th Oct 2018 massacre of 47 Shiite Muslims in Abuja; (13) 29th/30th June 2020 Army massacre of 30 unarmed Tiv Christians in Taraba State; (14) 23rd August 2020 Army massacre of over 30 Judeo-Christian worshippers and sports activists in Emene, Enugu State; (15) 20th night of Oct 2020 massacre of over 20 defenseless protesters in Lekki, Lagos State; (16) Oct 2020 massacre by Army/Police of over 300 unarmed citizens across Nigeria during the EndSARS protests including over 70 killed in Lagos and 50 killed in the Southeast, (17) Oct/Nov 2020 massacre by Army of not some 102 defenseless Igbo citizens in Obigbo, Rivers State, (18) abduction between 22nd Oct and 10th Nov 2020 of over 400 defenseless Obigbo residents in Rivers State and their clustered incommunicado detention in different military dungeons in Northern Nigeria, during which scores were tortured or shot dead in captivity; and (19) Jan 2021 killings by Nigerian Army in Orlu, Imo State where about defenseless residents of the area have so far been reported killed. The Orlu Army killings is led by a hateful Fulani-Hausa Muslim Army commander, named ‘Brig Gen Ibrahim Tukura’, Commandant, 34 Brigade, Obinze, near Owerri, Imo State.

Other Leading Perpetrators In The 19 Massacres

(1)Retired Lt Gen Abayomi Olanisakin, former Chief of Defense Staff (co-supervised the Sept 2017 massacre of over 180 defenseless Southeasterners and maiming of over 130 others in Abia and killing of not less than 102 Obigbo residents, maiming of 120 others and abduction of over 400), (2) Retired Air Chief Marshall Sadique Abubakar (supervised the air bombing of not less than 300 Christians in Jan and Dec 2017 in Borno and Adamawa States), (3) Major Gen Ibrahim Attahiru (new Army Chief of Staff and coordinator of the massacre of 216 defenseless Easterners in 2015/6 in Anambra and Abia States), (4) Retired IGP Solomon Arase and Retired IGP Ibrahim Kpotum Idris (co-supervised the massacre of over 400 defenseless Easterners on 30th August, 2nd and 17th Dec 2015, 18th and 29th Jan, 9th Feb and 29th and 30th May 2016 in Anambra and Abia and 20th Jan and 11th-14th Sept 2017 in Abia and Rivers States), (5) Retired Director Musa Daura (former DG, SSS and state intelligence provider in referenced massacres that took place in 2015, 2016 and 2017) and (6) Major Gen Adamu Baba Abubakar, (former GOC, 82 Division, Enugu and coordinator of the massacre of over 180 defenseless Easterners in Sept 2017), (7) Major Gen Lasisi Adegboye (current GOC, 82 Division, Enugu and formerly a principal staff officer of the Division and co-coordinator of the massacre of over 180 defenseless Easterners in Abia State in Sept 2017).