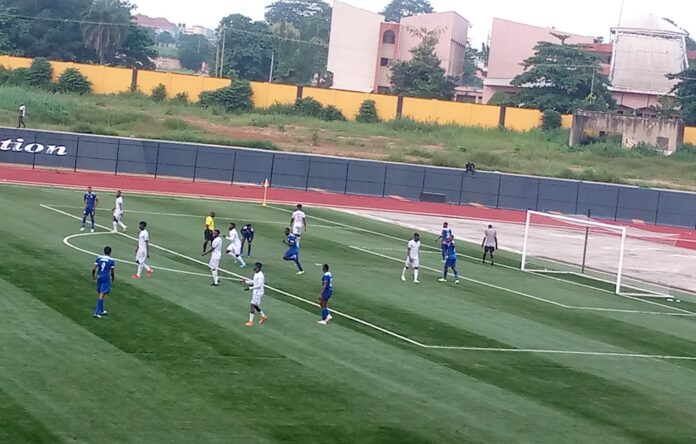 Shooting Stars of Ibadan on Saturday afternoon stunned the mammoth crowd at the Awka Township Stadium with a dramatic comeback to a 2-2 draw with Rangers Int’l of Enugu in the Match Day 36 encounter, NjenjeMediaNews reports.

The two sides played out a goalless draw in the first 45 minutes with Rangers also Flying Antelopes having a number of near goal situations with no much anxious moment in their goal area.

Rangers FC broke the deadlock in the 46th minute through Shedrack Asiegbu, just at the resumption of play in the second half and in the 55th minute later through Chidiebere Nwobodo.

The Ibadan based side popularly known as Oluyole Warriors fought back through Moses Omoduemuke who scored in the 73rd and 88th minutes.

The comeback sent the excited Awka fans into a sudden chill while some of them had to leave the stadium before the final whistle.

The enraged fans including some veteran Rangers int’l said the way the team surrendered a comfortable 2-0 lead within 15 minutes called the technical judgment of Coach Abdul Maikaba to question.

Nwakaibeya Anene said, the Rangers spirit was already building up in Awka but the draws from their last two games especially when they were winning was a bad to pay fans for their loyalty.

“First half was good, we defended very well even when we lost chances to score but the game changed after we scored, our defense collapsed, that was why we conceded the goals.

“We even told the coach to play one of our best defenders but he sent him back, the draw was unnecessary, our players were uninspiring,” he said.

Reacting to their performance in the game, Isiaka Mutiu said it was a product of determination and belief in God.

“It is God, I must be honest with you because we can’t explain; all we know is that we put in every effort we could.

“Our general manager told us to believe in ourselves, that everything is possible and thank God we got that all important point.

Agoye Olumide, coach of Shooting Stars said the draw was a product from their game in Ibadan last week when Abia Warriors who came back from 0-2 to draw level.

He said the Awka stadium pitch also brought out the best in his players as it made for free flowing football with no misbehaviour.

“The pitch was good for us, very good, if you don’t know how to play football, this pitch can help you,” he said.