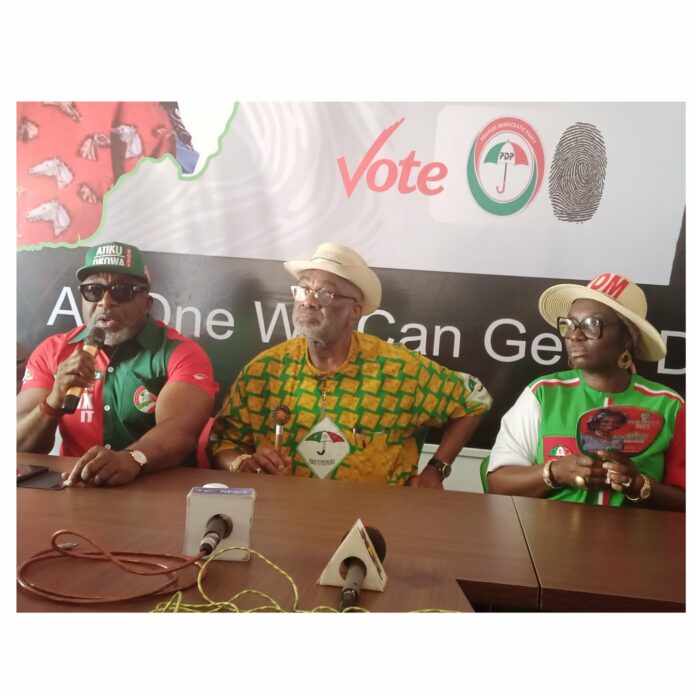 Senator Ben Obi and Prof Obiora Okonkwo respectively, the chairman and director general of Atiku/Okowa Presidential Campaign Council in Anambra State have revealed that a special team is working to resolve the impasse between the party’s presidential candidate and the G5 governors.

They stated this on Wednesday in Awka, Anambra State, during a pre-campaign flag-off press conference to announce the visit of Alhaji Atiku Abubakar on Thursday.

The campaign council also used the opportunity to present its itinerary for the candidate in Anambra State.

Senator Ben Obi and Okonkwo who addressed journalists said efforts are ongoing to reconcile Atiku with the G5 governors, and that the state is also poised to give Atiku victory in the 2023 election.

Obi said: “It is a common thing for political parties to have crises. That is not out of place, and we have a team that is working to resolve the crisis in the PDP.

“This is not something we want to make public, but let me tell you that the G5 governors are also willing for peace, Wike (Rivers State governor) has said so. We have a team that is working on that, and for now, we are not willing to make the outcome public, but we are working.”

Okonkwo also added that: “Even in those states where those rifts are going on, there are still campaigns going on, and the plan is to vote PDP from top to bottom. In Abia, you have heard of the five-over-five slogan, and all our governors are still campaigning for Atiku.

“In all their (G5 Governors’) demands, they have never said they have any problem with Atiku personally. It is not a matter that can not be resolved.”

Speaking on the itinerary of the candidate in Anambra on Thursday, Okonkwo said the party expects massive mobilisation, and that a number of activities have been lined up for him.

“Arrival is by 10 am, we will meet him at the airport and also move to the Governor’s Lodge, where the presidential candidate will meet with Governor Chukwuma Soludo. From there he will have an interactive non-partisan meeting with the traditional rulers of Anambra State.

“He will commission the campaign office, and also interact with town union leaders, market leaders, at Ekwunife Centre, before hitting the campaign arena.”

The party had earlier announced a public holiday among all PDP members in the state, and Okonkwo said the decision stands, and that a massive crowd is expected at the campaign.