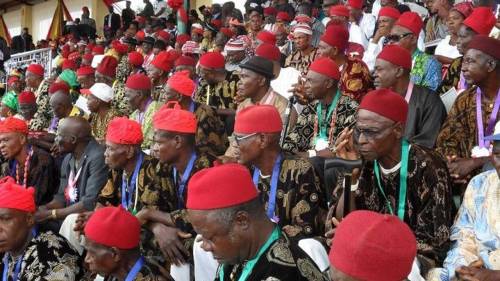 THE SEARCH FOR THE PRESIDENT GENERAL, OHANAEZE NDIGBO WORLD WIDE -2020.

May I humbly thank Imo State Ohanaeze NDIGBO, ELDERS and Stakeholders of Imo State.
May I equally humbly confess that my decision to contest for the office of President General of Ohanaeze Ndigbo World Wide was a decision not based on self-aggrandizement, personal ambition or self-promotion. By my age and career history I have long out grown all that. Instead, Your Excellency, Royal Fathers, ladies and gentlemen, my most compelling necessity was service, a timely and crucial service at one of the most critical times in Nigerian history with dire consequences, particularly for Ndigbo as a national entity. Indeed not only has governance become both difficult and complex in Nigeria, but down right an EXISTENTIAL THREAT to NDIGBO in particular.
The Igbo dilemma in Nigeria has come home at last.
And the time requires a very careful and delicate skilled manager in the relationships between Ndigbo and other Nigerian nationalities especially the national power elites.
This requires a mature and experienced person with a capacity to build enough consensus to define and defend the interest of Ndigbo.
In this respect, my background provides enough evidence.
BACKGROUND
FORMER:
 Nigerian Ambassador to:
The United States of America
The State of Israel
Republic of Cyprus
 Director General, Nigerian Institute of International Affairs (NIIA)

 Adviser to President Ibrahim B. Babangida on International Affairs.

 Member of National Delegations and conference worldwide.
Distinguished ladies and gentlemen, with all sense of modesty, I can and would assemble Igbo talents and experts to cater and defend the destiny of Ndigbo with appreciable success and diplomatic dexterity, decency and decorum. And Ndigbo will never be victims again, of Nigerian tragic circumstances which they did not create nor can they control.
Again with all modesty, I have had political experience on this important topic and played apprenticeship that went with it, with most of our Igbo leaders-
In my view, ever since the end of the Civil war NDIGBO have not faced EXISTENTIAL threats as we face today. The NATIONAL SITUATION is precarious and our position must be carefully handled and wisely presented. As Atilla The Hun advised we must “choose our enemies wisely and our friends carefully.”
For far too long NDIGBO have been objects of stereotype and profiling which ended in being misunderstood and misrepresented before other Nigerians. That has been the Igbo albatross everywhere in national politics or business, academia or artisans. Negative profiling has been an Igbo cross to carry since Nnamdi Azikwe’s emergence in Nigeria politics in the 1940s.
WE MUST CHANGE THE NARRATIVE
For example; while the Igbos preached Pan Nigerianism, Pan Africanism and universal humanity, we inadvertently surrendered the “real politik” of multi-national states which was the only way to protect our own interests, and be effective in a federation. This is because, while we were busy playing politics of idealism, others were playing politics of realism and consolidation of national power through all kinds of manipulations. Hence, from Dr. Nnamdi Azikiwe on NDIGBO played politics of general national interests while other nationalities, particularly the big other ethnic groups played particularistic politics of self help. In the end with the British as guardians, Igbo goodwill and patriotism became instruments of their own oppression and humiliation. At independence in 1960, Dr. Nnamdi Aizikiwe got a ceremonial title of Governor General, Alhaji Tafawa Balewa became Prime Minister and Chief Obafemi Awolowo became opposition, an alternative government.In fact, no people in recent history have been as unfortunate or at best have had mixed fortunes as NDIGBO in their relationship with the rest of Nigerian nationalities and in Nigerian politics and governance.
Particularly, Igbo energy and enterprise were misunderstood as “Over Ambitious”
 The Igbo talent and ability to turn adversities into advantages, obstacles into opportunities and difficulties into dividends were misrepresented as attempts at domination.
Consequently, quite often Igbos were confronted with envy, anger, hostility and violence at any given crises in Nigeria and even outside Nigeria. But in the end it is still better to ENVY NDIGBO than PITY US.
We are therefore at a point to RE-ASSESS the IGBO DILEMMA in Nigeria. Every major group even the minorities are doing same today. NDIGBO from all indications see RESTRUCTURING as the most preferred option. However, whatever or whichever options others offer, what is real is that all the nationalities in Nigeria will sooner or later go into negotiations or debates over Nigeria’s future. And through OhanezeNdigbo we must be ready to negotiate effectively by having a skilled and experienced people to bargain in the interest of NDIGBO.
Specifically, we seek unity but not unity of slaves and masters, and we seek peace but not peace of the grave yard. We seek justice because we know that throughout history those denied justice have had no interest in peace. As it stands now, it seems Nigeria and Nigerians would engage themselves in something like PENALTY SHOOTOUT, every group must be careful in selecting their kickers/strikers. What is at stake requires the combination of the talents of the lion and the fox or the eagle and the dove. Who, or the team that REPRESENTS us matters for that will determine much of the destiny of NDIGBO in Nigeria or what follows. Our position should therefore begin with efforts to effectively re-integrate NDIGBO into Nigerian political process Effectively, Significantly, and Relevantly. This will require a serious diplomacy and not confrontations or conflicts. Power elites reward their friends and frustrate or punish their enemies. Diplomacy’s greatest lesson is to know how to “CHOOSE your enemies wisely and your friends carefully”. And most intriguing is how to make “your enemy” your friend for specific objectives. In fact, in politics and diplomacy, it is the identity of interests that are the surest of bonds between states and individuals in critical circumstances and moments as we are now.
CONCLUSION
We can have our people fairly and functionally united again, as in Igbo State Union days. But we must also again have a defined common cause. There are therefore vital work to be done, work that cannot wait, work that must be done quickly. Nothing unites a people more than success, or prospects for success.
The office of President-General of OhanezeNdigbo is not a career or a job or a position to fulfil personal ambition. It must particularly at this moment in our history be a position that comes through inspiration, and experience to navigate the Igbo destiny through precarious times of uncertainty, doubts, and general insecurity. Actually, the world itself including Nigeria is becoming not only more complex but downright dangerous. This position is to be held in sacred trust for it involves our people’s destiny.
As one of the late Ikemba Ojukwu’s sons put it, “our major need now is an emergence of a leader figure with the courage of late Ojukwu, Ikemba, wisdom of Dr. M.I. Okpara and sagacity of Chuba Okadigbo, yet endowed with tamed emotion to steer our pride and productivity into a common force and also lead us into demanding redress for perceived injustice”.

And what actually is the irreducible minimal demand of Ndigbo in Nigera?
Generally to me, the demand is for justice, Equity and Fairness. That is what we wish to achieve by RESTRUCTURING the Nigerian Political system, by bringing governance to a level playing field to all its citizens. And back to the country bequeathed to us by our Founding Fathers “where tribes and tongues may differ but in brotherhood we stand.”
Certainly, it is time for us to change the narratives of the perennial and precarious debates on the future of Ndigbo in Nigeria. An Igbo proverb says “MMIRI GA EKWE NWATA GAFERE OKWERENIYA OLAGBA AZU N’ALA MMIRI EBE OSIBIA.” If the river does not allow a child to swim back to safety to the shores of the river. Our people cannot and should not be condemned to permanently swimming in a dangerous ocean, until we inevitably sink and drown, God forbid.

In the present trying moments may we truly have a spirit of purpose, and nationalism that a common love for our freedom may override whatever other issues that do divides us.
That a sense of mission may grow in all our hearts and we leave here today as a nation and people who care for each other and one another regardless of all their differences. We must be reminded that a team does not win championship if its players have different agenda. Definitely we are united by grief and our history.
Ours is a righteous cause. Those who oppose us will be defeated, for unlike them, we do not seek to dominate, control or humiliate our fellow citizens or fellow humanity. Instead, we seek and must at all times seek a world where justice and fairness for all prevail, charity to all and malice towards none. The Igbo struggle for justice and equity in Nigeria has been long and torturously agonizing, but there is light at the end of the tunnel, as Nelson Mandela said “it looks impossible until it is done”. With our new narratives of courage without rancor, wisdom without arrogance and intelligence with humility, we will meet our detractors and adversaries or rivals with offers they cannot resist, and situations that compellingly encourage taking right actions for the right reasons.

Finally may I assure NDIMO State that I accept as an obligation their decision to CHOOSE ME to contest the President General of Ohaneze Ndigbo World Wide as a challenge and a responsibility.
A challenge that I must confront triumphantly with honour and dignity, and a sense of Responsibility that history beckons my humble self to shoulder, for the benefit of Ndigbo, humanity and to the glory of God. Do I add, so help me God.
Thank you.