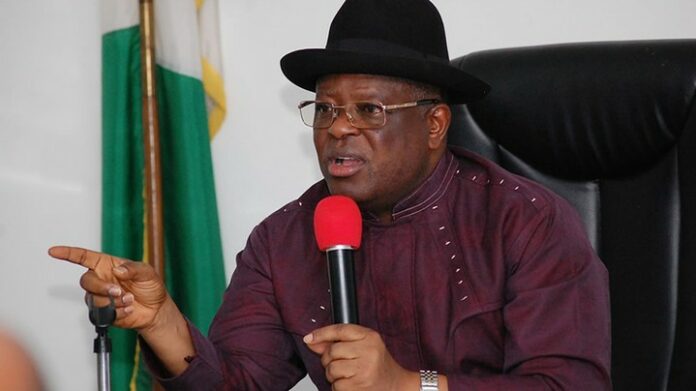 Governor Dave Umahi of Ebonyi State has demanded an apology from some members of the opposition Peoples Democratic Party, PDP, who attacked him when he dumped the party two years ago.

It would be recalled that the governor who aspired for the presidential ticket of the ruling All Progressives Congress, APC, in June, dumped the PDP for APC on November 17, 2020.

Speaking on Arise TV on Friday, Umahi alleged that some of his former party members who were angered by his defection to APC are now crying. He demanded apologies from them.

He said, “I didn’t move from PDP to APC to have the ticket of the ruling party as presidential candidate. I only did that because I perceived that PDP was not going to give ticket to an Igbo man and I felt like it was not fair because we have served the party since 1999.

“A lot of people that are crying today were the people that attacked me for leaving PDP at that stage but subsequently, they left and so they owe me apologies.”

The governor’s assertion is coming amid a face-off between the Rivers State Governor, Nyesom Wike, and the party’s presidential candidate, Atiku Abubakar.

The Governor had on Thursday threatened to help the opposition party lose the 2023 presidential election.

Following the outcome of the party’s primary, which produced Atiku as its presidential flag bearer, Governor Wike and his loyalists have been in a war of words with the former Vice President and the National Chairman of the party, Iyorcha Ayu.

Speaking on his current relationship with Wike, Umahi said he has reconciled with the Rivers Governor, stating they are moving together.

According to him, “I and Wike had a quarrel, and when there is quarrel, there will be anger, and that anger may not be a holy one. That is what transpired between us.

“Before I left PDP, we were best of friends, and you know how better it will be when your friend leaves you. That was the case between Wike and I.

“We have since reconciled and we are moving together. Wike and other Southern Governors believed in the Southern presidency and this is the spirit that is currently flogging the PDP.”