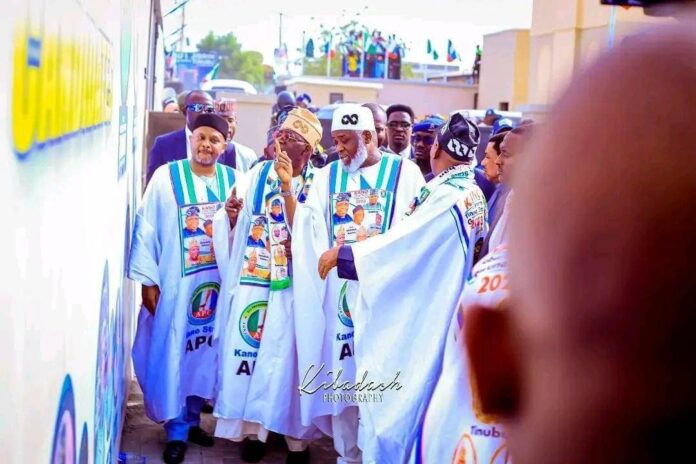 The All Progressives Congress (APC) Presidential Candidate in the 2023 polls, Bola Tinubu, has donated N100 million to flood victims in Kano, Njenje Media News reports.
Tinubu, a former Lagos State Governor announced the donation during a dinner organized in his honour by the Kano business community council on Saturday in Kano.
The presidential candidate called for sustained prayers to end flood disasters in the state and the nation in general.
Tinubu said the donation was aimed at alleviating the sufferings of the victims in the affected Local Government Areas.
The APC candidate said if elected, he would ensure that Nigeria’s diversity served as a source of prosperity for all.
“Unity in diversity, peace and prosperity are the fulcrum of my mission in this contest,” he said
The APC National Leader noted that the federal government had taken several measures to build infrastructure and improve the ease of doing business across the country.

The APC presidential candidate pledged to reposition existing industries and make them a competitive source of industrialization and growth, not just for the North or Kano but the entire country.
He also commended Gov. Abdullahi Ganduje for his stride in Infrastructure development in the state.
Mr Tinubu, who described Mr Ganduje as a “friend and a reliable partner”, said that the relationship between Kano and Lagos dates back years due to the similarities between the two economic giants.
The APC presidential candidate also promised the business community that he would provide enabling environment for businesses to thrive in the state.
He thanked the business community for the honour and promised to look into their blueprint if elected.
“If we win the election, we will call your representatives and see how we can move the nation forward,” he said.
Earlier, Governor Abdullahi Ganduje said Mr Tinubu has the capacity to provide the needed leadership that would consolidate and continue to ensure the country’s democratic gains.
“Kano is APC and APC is Kano. So, our people are on board and we are soliciting their support as usual,” he explained.
Mr Ganduje said Mr Tinubu was a leader who would unite and move the nation forward.
He charged all party members to remain united and focused as the party moved with Nigerians to victory in 2023.
The APC National Chairman, Abdullahi Adamu, commended the business community council for organising the dinner for the presidential hopeful.
Mr Adamu described the gesture as an endorsement, saying that their demands would be met if Mr Tinubu was elected as president.
Some of the members of the business community council spoke and presented their blueprint to Mr Tinubu, appealing to him to provide an enabling environment for businesses to grow and flourish if elected.
They also urged him to focus on power as many industries were closed due to a lack of a steady power supply.
They also commended President Muhammadu Buhari for building the largest railway project in the state, the AKK gas pipeline and Dala Inland Dry Port.
The APC presidential candidate was accompanied to the dinner by the Governors of Kano, Jigawa, Yobe and Zamfara states.
Others included members of the National Assembly, state executive council and other party stalwarts.
(NAN)