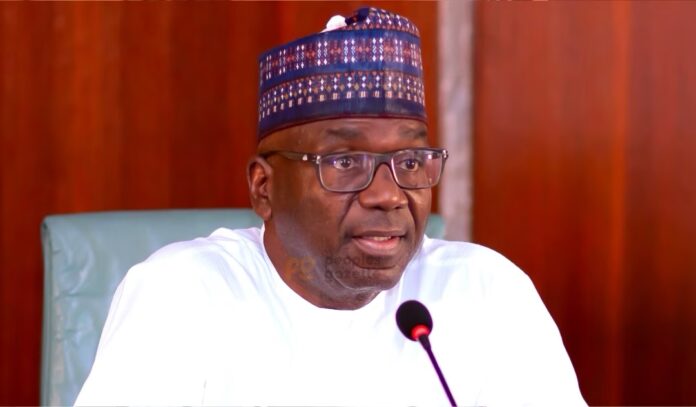 The 2023 general elections in Kwara State promises to be an interesting battle of the titans in the murky political arena of the State, Njenje Media News reports.

Political pundits are of the view that the political Tsunami christened ‘Otogo’ revolution championed by the All Progressives Congress, APC, which swept the Peoples Democratic Party, PDP, out of power may find it difficult to repeat the same victory recorded in the 2019 elections in the State.

Our sources recall that the APC in 2019, recorded an unprecedented landslide victory, winning the governorship seat and all the National and State House of Assembly seats.

The PDP, however, later succeeded in snatching a seat in the 24-member State House of Assembly through a judgement by the Election Tribunal.

Political watchers observe that the APC may find it hard in 2023 to repeat the same feat considering the intra-party crisis which tore the party apart shortly after Governor Abdulrahaman Abdulrazaq was sworn-in.

This is because the major gladiators who teamed up with Governor Abdulrazaq to win the election have deserted him in pursuit of their political ambitions on the platforms of other political parties in the State.

Aside Yaman Abdullahi, the PDP gubernatorial candidate who hails from Kwara North Senatorial District, the three others are also contesting the 2023 elections as governorship candidates from Kwara Central alongside Governor Abdulrahaman Abdulrazaq.

With Kwara Central Senatorial District having the highest votes cast in every election, it is certain that it would remain a battle-ground for the gubernatorial election.

However, it is unlikely that the story would be the same again in 2023 for the ruling APC government of Governor Abdulrahaman Abdulrazaq, as three other formidable contenders from the same senatorial district will lock horns with him in the governorship race, according to political pundits.

Our sources observed that the personalities and the followership of Professor Oba Abdulraheem of the NNPP, Waziri Yakubu Gobir, YPP, Hakeem Lawal of the SDP, and Lukman Mustapha, among others, are enough to rock the boat of what remains of the ‘Otoge’ movement in the Kwara Central senatorial district.

A total of 35 candidates registered with INEC to contest the governorship election, while Governor Abdulrahaman Abdulrazaq won the election by polling 331,546, defeating the PDP gubernatorial candidate, Razaq Atunwa, who came second with 114,754 votes and several minority candidates.

With a difference of 216,792 votes, with which the APC defeated the PDP, political watchers express the fear that much needs to be done by the APC to retain political power in 2023 as the sharp division in the party has depleted the party with majority of the members switching to other political platforms.

In Kwara North Senatorial District, the people of Edu and Patigi Local Government Areas may not abandon their own man, Yaman Abdullahi who is from that axis because it is the second time they are having a shot at the seat in the political history of the State after former governor Mohammed Shaaba Lafiagi.

Equally, in Kwara South Senatorial District, where the Minister of Information, Lai Mohammed, Saeed Popoola, Bashir Bolarinwa, Barrister Iyiola Akogun Oyedepo, and Senator Suleiman Ajadi hail from, the ruling APC government may also not find it easy to coast to comfortable victory as it happened in 2019.

There are many political parties ready for the 2023 gubernatorial election in the State registered with the INEC, but the race is expected to be between the two major dominant parties spread across the 16 local government areas in the State, namely: the APC and the main opposition party, PDP.

The main opposition party, PDP, ruled the State for 16 good years claiming that the party performed better than the ruling APC which is just three and a half years in office, impacting positively on the lives of the citizenry across the three Senatorial Districts of the State in terms of infrastructural developments.

At the ‘Talk Show: Kwara Yesterday, Today and Tomorrow, our Dream’ organised by the PDP, in Ilorin recently, the 2023 gubernatorial candidate of the party, Yaman Abdullahi, and a national chieftain of the party, Dr Bukola Saraki, praised the good legacies of the party met on ground and questioned the scorecard of the ruling APC government of Governor Abdulrahaman Abdulrazaq.

They challenged the governor to come out for a public debate on his stewardship in the last three and a half years, contending that there is nothing to show the people of the State in terms of physical developmental projects, hence the need for Kwarans to vote PDP back to power.

The PDP gubernatorial candidate, particularly questioned the over N50b debt incurred by the ruling APC government in the last three and a half years, saying the people of the State would want to know what the funds were used for.

On his own part, Governor Abdulrahaman Abdulrazaq said he has changed the face of governance and Kwarans won’t go back to their vomits by asking the PDP to come back to power again in the State.

At the flag-off of the campaign by a House of Representatives candidate, Mr Ajulo-opin in Omu-Aran on Friday, Governor Abdulrazaq, enumerated the various achievements of the ruling APC government in Kwara South Senatorial District and urged the people to vote massively for all candidates of the party in the 2023 general elections in the State.

He likened the PDP “to a person who messed up a rented house, defecated and still wanted to occupy it after another person had carefully cleaned the mess.

“They want to take us backwards. No, we have moved on in Kwara. Is it in education, water, workers welfare, rural-urban development or health? What was their record to deserve a comeback?” Governor Abdulrazaq queried.

He promised the people more developmental projects if voted for the second term in office.

By and large, with the governor holding a series of meetings with community leaders and monarchs across the State just a few months to the elections, the people of the State are anticipating a battle of the titans in 2023.