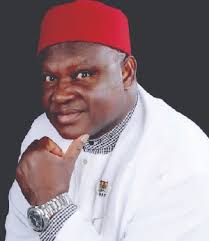 Founding national chairman of the All Progressives Grand Alliance, APGA, Chief Chekwas Okorie, on Saturday, hinted at his return to the party.

Njenje Media News recalls that the Igbo leader left the party years ago following irreconcilable differences with the then leadership of the party under Senator Victor Umeh.

He formed the United Progressives Party, UPP, from where he later defected to the All Progressives Congress, APC.

However, the new national chairman of APGA, Chief Edozie Njoku led the members of the Party’s National Working Committee, NWC, to Okorie’s Enugu residence on Saturday, during which they apologized to him for all the unjust treatment against him.

They asked him to return home and not abandon his baby.

Although Okorie was not exact in response to their return, he declared that they would get a favourable answer, and went further to say that new dawn beckoned for APGA.

“I’m so happy to recite the APGA slogan again; I must tell you that I’m a bit emotional, with everything said by the national chairman, Chief Edozie Njoku who has just been confirmed by the Supreme Court and recognized by the INEC.

“Even if my heart is made of stone, I’m touched, you have melted it; however, on APGA matters, my heart can never be made of stone.

“APGA is a victim of political brigandage carried out by political buccaneers. But today, God has rescued APGA, the days of the locust is over. We are going to build back APGA and people like Victor Umeh must be checked because he is a human virus.

“I will consider what you have requested and I assure you of a very favourable answer after I consult with all those who stood by me these years.

“However, I will not keep you waiting for too long. Nigerians will hear from me within the coming week.”

Earlier, Njoku and the APGA NWC members said the essence of the visit was to apologize to Chief Okorie and bring him back into the fold.

“We are here today to say that APGA is sorry from the bottom of our hearts. We apologize profusely for the injustice you suffered.

“A Supreme Court judgement this week confirmed us as the authentic leadership of APGA and this is our first outing. We are here to say that APGA is your home, APGA is your baby, please come back to your home,” Njoku said.

He declared that APGA was not an Igbo party but a national political platform for the marginalized people from across the country.