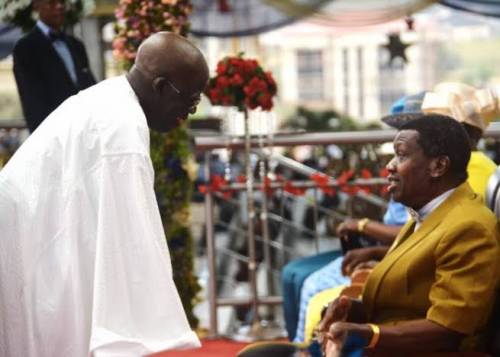 The Redeemed Christian Church of God (RCCG) has debunked a viral report that its General Overseer, Pastor Enoch Adeboye met with the presidential candidate of the All Progressives Congress (APC), Bola Tinubu to endorse the latter and discuss other issues regarding the forthcoming general elections, NjenjeMediaNews reports.

One of such issues allegedly discussed is the Muslim-Muslim ticket of the APC.

Tinubu, a Muslim, had announced a fellow Muslim, Kashim Shettima, a former Borno governor as his running mate. This has been condemned by many Christians and some Muslims.
Daily Post, Thisday and some other media platforms had reported that Bola Tinubu met with the General Overseer of the Redeemed Christian Church of God, RCCG, Pastor Adeboye on Sunday at the Redemption Camp, along the Lagos-Ibadan Expressway.
Tinubu’s meeting with Adeboye was said to have been centred around his decision to settle for a Muslim-Muslim ticket.

It was also reported that Tinubu’s wife, Senator Oluremi, who is a deputy pastor with RCCG, among others, was part of the meeting.

“He met Adeboye on Sunday. The meeting was very fruitful. Adeboye is not against Muslim-Muslim ticket,” Thisday had quoted a source as saying.

But in the statement made available to SaharaReporters, RCCG described the news as fake, urging the general public to disregard it.

The statement reads: “It has come to our notice that some news outlets are reporting that a meeting Between Pastor E.A. Adeboye: The General Overseer of the Redeemed Christian Church of God Worldwide and the former Governor of Lagos State Mr Bola Ahmed Tinubu was held few days back at the Redemption Camp where our esteemed father in the Lord was said to have supported the preferred candidature of the Party the Former Governor is a member of.

“This is to inform the general public that 1) Pastor E.A. Adeboye is under the authority of God, the Christian Association of Nigeria (CAN) and the Pentecostal Fellowship of Nigeria (PFN), and as such will not speak on behalf of Christians on issues regarding policies.

“2) Pastor E.A. Adeboye and the RCCG have not and will not endorse any candidate for the 2023 General elections in Nigeria.

“3) The news reported by Daily Post is false. Daily Post and other News Outlets should desist from spreading false information about Pastor E.A. Adeboye and the RCCG as it defeats the code and ethics of Journalism and the full weight of the law will be employed if such happens in future.