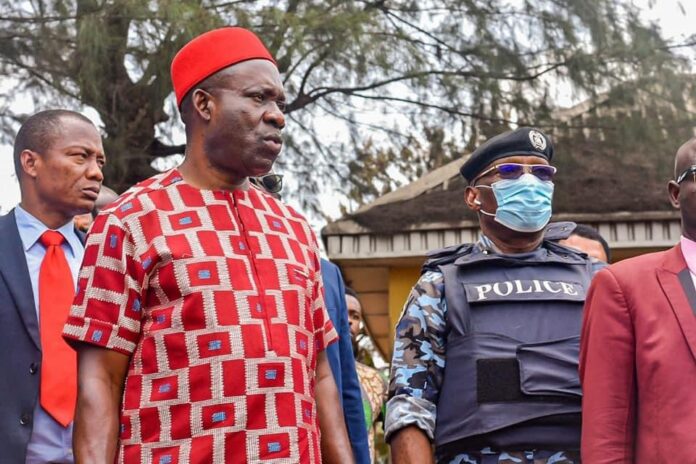 Addressing members of the press at Aguata Local Government Area Secretariat, the Executive Governor of Anambra State, Prof Charles C. Soludo CFR said that armed criminals have been operating as kidnappers, rapists, etc. for close to two years from camps set up in Aguluezechukwu and Oboji.

The security personnels in the state clamped on them and in the process of fleeing, decided to set Aguata LGA headquarters ablaze. He reiterated his stance on offering amnesty to those in the bush, so they can be rehabilated and become useful to the society but stressed that those who refuse the offer shall face the full wrath of the Law because they can’t intimidate the people of Anambra State.

Mr Governor further revealed that 85% of these criminals are from a particular state in South East while the remaining 15% come from other states. Items recovered in their camps are registers of kidnapped victims, weapons, charms, etc. Prof Soludo assured the people that peace and stability must return in Anambra and SouthEast. “Anybody in the bush is a criminal and will be treated as such. We will come after criminals because the people’s power must triumph. We must create a liveable and prosperous homeland where peace, security and progress must thrive”.