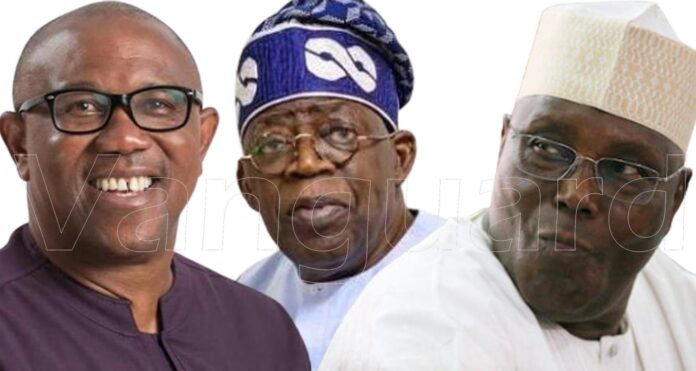 Those the lawyers are praying the court to declare ineligible to participate in the presidential contest are candidate of the ruling All Progressives Congress, APC, Senator Ahmed Bola Tinubu, that of the Peoples Democratic Party, PDP, Alhaji Atiku Abubakar, as well as the flag-bearer of the Labour Party, LP, Peter Obi.

The plaintiffs, Ataguba Aboje, Oghenovo Otemu and Ahmed Yusuf, in their suit, marked: FHC/ABJ/CS/1004/2022, are contending that the three candidates and their political parties, flouted the electoral law by their failure to nominate their vice presidential candidates before the conduct of their primary elections as required by law.

RELATED POSTS:  Fulani Group Knocks Miyetti Allah Over Anti-Obi comments, Declares Him A Nationalist And A Believer In One Nigeria

More so, the Plaintiffs, are asking the court to determine whether in view of the same provisions of the laws, the Independent National Electoral Commission, INEC, can accept from a political party, nomination of a candidate for election to the office of the President who participated alone in the primary election without nominating another candidate as associate from the same political party to occupy the office of the Vice President.

They further averred that several days after the conclusion of their respective primaries, APC, PDP and LP, submitted to INEC, names of Alhaji Kabir Masari, Senator Ifeanyi Okowa and Dr. Doyin Okupe as their respective Vice Presidential candidates.

They argued that such nomination was not done in compliance with the law.

Meanwhile, no date has been fixed for the matter to be heard.