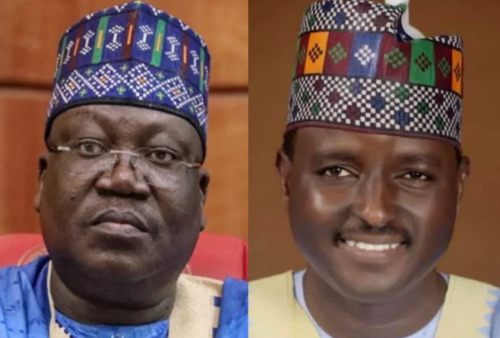 The All Progressives Congress has written the Independent National Electoral Commission (INEC), asking it to adopt Senate President, Ahmad Lawan as its senatorial candidate for Yobe North in 2023, NjenjeMediaNews reports.

Following Lawan’s failure to clinch the All Progressives Congress (APC) presidential ticket, there are claims that he has made moves to return to the Senate to continue to represent the people of Yobe North Senatorial District, People’s Gazette reports.

Meanwhile, during the primary elections, Bashir Machina emerged as the Yobe North Senatorial candidate of the APC. But the party, in a letter to INEC dated June 14 asked the electoral body to adopt Lawan as its candidate.

The APC in the letter conveyed its intention to have INEC upload Lawan’s name as the party’s candidate from the district, sidelining Machina who won the election.

In the past few weeks, following rumours of Lawan’s interest in the senatorial ticket, Machina had insisted that he won’t cede his mandate to anyone as he duly won the senatorial primary.

With the move taken by the APC, it appears as if the party had relied on a clause that mandated primary contenders to withdraw from a race voluntarily or be arbitrarily substituted by the party as the case may arise.

Machina acknowledged the clause but said during a Channels TV interview on Wednesday, monitored by SaharaReporters that he deliberately did not fill out the withdrawal form mandated for all aspirants in the APC to fill because he was not in the contest to withdraw.

Machina had expressed confidence that the leaders of the party, whom he described as law-abiding, would not want to go against the Constitution and the Electoral Act.

According to him, he is sure Lawan is not planning to return to the Senate after his tenure ends in 2023.

“He (Lawan) didn’t believe and I’m sure he didn’t plan to go back to the National Assembly; that’s why he contested for President and lost,” he said.

“The motto of APC is justice and peace and then, of course, this is a party that’s being led by responsible law-abiding citizens, so being law-abiding, you think that it will be part of the law or it will be considered as justice for you to say well, somebody had a mandate from the people who elected him and then you change him suddenly overnight. No, I’m sure my party will not just do that, I’m confident my leaders are very fair and just, going by the motto of the party – justice and peace,” he said.

Machina also noted that it would be wrong for the leaders of the party to replace his name with that of Lawan in the list to be submitted to the electoral body, INEC.

He said, “I won’t say my name is serendipitously replaced or whatever, you know the electoral act is very clear. Somebody, I don’t think in this era, will just sit down and remove someone’s name and replace another person’s name, especially somebody that didn’t undergo the process of that primary election. Somebody that didn’t contest an election, naturally can’t be in that election that’s covered by the law and the Electoral Act.”