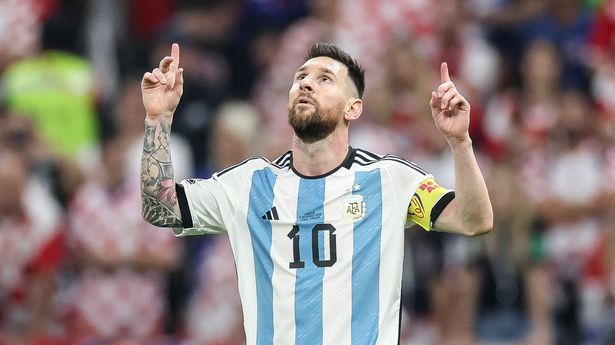 Argentina survived a miraculous comeback in one of the great World Cup finals with France to win their third crown,  4-2 on penalties after a spectacular 3-3 draw at the Lusail  Stadium.

The South American champions were ostensibly set to cruise to a third World Cup crown as Lionel Messi and Angel Di Maria struck inside the opening half, with a lacklustre France having no answer to Argentina’s unbridled supremacy.

However, a quickfire brace from Kylian Mbappe approaching the final 10 minutes of the contest incredibly drew France level to force extra time, where Messi claimed his second of the match before another Mbappe penalty saw the teams finish level after an enthralling 120 minutes.

Lionel Scaloni’s charges held their nerve from 12 yards, as Kingsley Coman and Aurelien Tchouameni fluffed their lines before Gonzalo Montiel scored the deciding spot kick to end the 1978 and 1986 champions’ 36-year drought without another World Cup in the cabinet.

France had established a reputation as a side content to sit back and hit teams on the counter in the current World Cup, but such a strategy proved wholly ineffective against the well-drilled Albiceleste machine.

Scaloni’s men won the midfield battle with ease and dominated proceedings from the off, with the recently reintroduced Di Maria causing havoc on the left-hand side.

The Juventus veteran ballooned an effort over the top in the 17th minute after Theo Hernandez conceded possession – not for the first time in the opening exchanges – and he would make Ousmane Dembele his next victim six minutes later.

Di Maria skipped past Dembele into the penalty area before being clumsily brought down by the Barcelona man, allowing Messi to give Hugo Lloris the eyes and send the France number one the wrong way from 12 yards.

In doing so, Messi became the first-ever player to score in the group stage, last 16, quarter-finals, semi-finals and final of a single World Cup, and there was little in the way of response from a lacklustre France.

The Manchester City man released Alexis Mac Allister down the right, and the Brighton & Hove Albion attacker crossed for Di Maria to fire over the onrushing Lloris into the far corner of the net.

Emotion very nearly took over for Di Maria as France boss Didier Deschamps responded by bringing on Marcus Thuram and Randal Kolo Muani for Dembele and Olivier Giroud, but Emiliano Martinez still got to half time without having to make a single save.

Whatever half-time conversations Deschamps had with his players proved ineffective, as Argentina remained on top following the restart, aggressively thwarting the 2018 champions and testing Lloris through Rodrigo de Paul and Alvarez.

Les Bleus belatedly started to show some bite after the hour mark, and they would post their first shot of the game in the 71st minute as Kylian Mbappe drifted infield from the left and let fly, but his effort sailed harmlessly over the crossbar.

Cristian Romero and Nicolas Otamendi dealt with a passive France side relatively well, but the latter then got the wrong side of the bright Kolo Muani in the 79th minute and conceded a penalty after bringing down the Eintracht Frankfurt forward.

After witnessing Argentina’s number 10 finish from the spot, Mbappe stepped up and just about managed to fire home into the net past Martinez, who got a hand on the ball but could only palm the Frenchman’s shot further into the corner.

Out of absolutely nowhere, France’s talismanic striker drew the holders level barely a minute after bagging his first, playing a neat one-two with Thuram and unleashing a thunderous volley into the far corner to leave the Argentina contingent shell-shocked.

La Albiceleste paid the price for dropping down a gear in an astonishingly quick turnaround in fortunes, and Argentine hearts were in mouths when Thuram went over Enzo Fernandez’s trailing leg inside the box in the 87th minute, but the Borussia Monchengladbach man smiled a knowing smile as he was booked for diving.

Despite the best efforts of Messi, who sent a venomous long-range strike onto the raised glove of Lloris late on, there were no further goals in eight minutes of second-half injury time as another 30 minutes of nail-biting loomed.

France continued to dictate the tempo in the first period of extra time, but Les Bleus were indebted to Dayot Upamecano for producing a sensational block from Lautaro Martinez in the 104th minute before Montiel’s scissor-kick follow-up was headed over by Raphael Varane.

A galvanized Argentina were not to be denied in the 109th minute, as a slick passing move ended with Lloris saving Martinez’s powerful attempt from a tight angle, and Messi’s rebound was cleared away by Jules Kounde, but the flashing watch of referee Szymon Marciniak indicated that the ball had crossed the line.

However, just when the 2022 World Cup final could not become more nonsensical, Montiel blocked Mbappe’s shot with his arm inside the area in the 27th minute of extra time, and the Paris Saint-Germain attacker clinically completed his hat trick from the spot.

In keeping with the crazy theme of the final, Emiliano Martinez thwarted Kolo Muani one on one before Lautaro Martinez inexplicably sent a free header well wide of the mark in injury time, and the destiny of the 18-karat gold trophy would be decided by 12 yards following one of the most spectacular World Cup matches in history.

Mbappe and Messi both converted from 12 yards before Martinez dived to his right to keep out Coman, and Paulo Dybala confidently rolled his effort down the middle to hand Argentina an early advantage.

Mind games from Martinez worked a treat as Tchouameni dragged France’s next spot kick wide, and Leandro Paredes’s effort proved too powerful for Lloris to keep out.

Argentina were only one spot kick away from glory, and Kolo Muani kept France alive with a rocket down the middle, but Montiel coolly sent Lloris the wrong way to spark tears of joy and cheers of jubilation for those in blue and white.