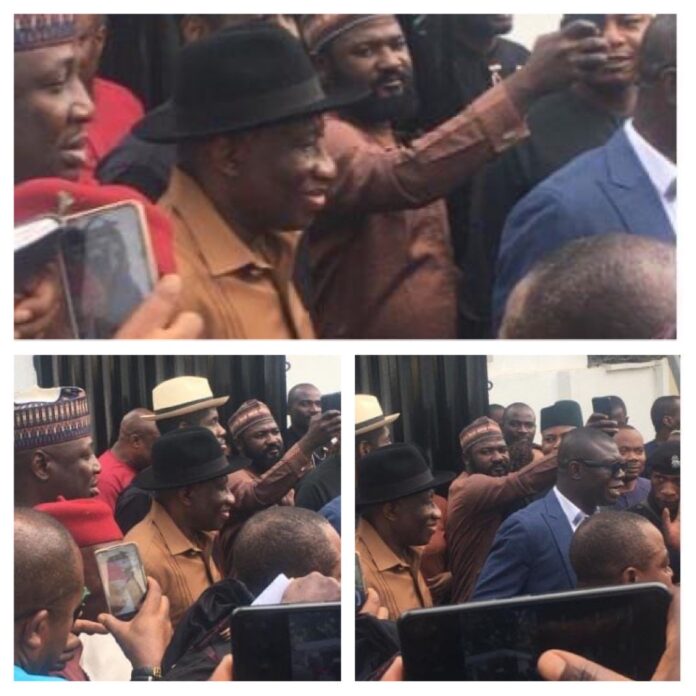 After chanting and screaming his name for minutes, Ex-President Goodluck Jonathan, Friday came out to receive protesters who stormed his Abuja office.

Vanguard had reported how pro-Jonathan protesters stormed his office, demanding he contest in the forthcoming presidential election.

A spokesman for the group, Mayor Samuel, who is also the convener of the Youth Compatriots of Nigeria said, “We were deceived and brainwashed by those who claimed they could do it in 2015.

“Now, we know better, under Jonathan the minimum wage could buy one or two bags of rice. What do we have today? We are begging President Jonathan to forgive us, we have realized our mistakes, we want him back to complete what he started.

Responding to them, Jonathan asked Nigerian youths to show greater interest in the nation’s political process.

The former President said it was time for youths to take advantage of the Not Too Young To Run Act to participate actively in the electoral process.

He said he was aware that they were “here to ask me to declare,” but he said, “I cannot declare because some process are still ongoing.”

“Yes you are calling me to come and declare for the next election, I cannot tell I’m declaring. The political process is ongoing just watch out. The key role you must play is that Nigeria must get somebody that will carry young people along.”