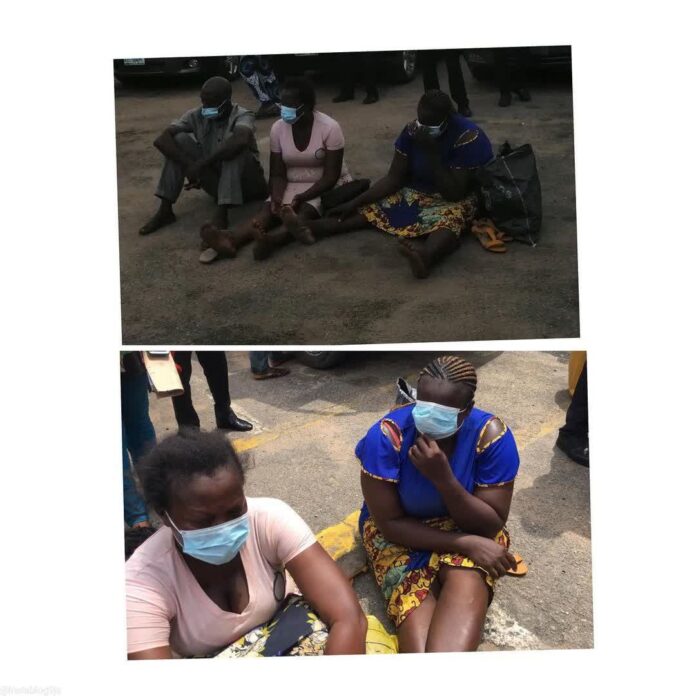 The Lagos State Police have arrested a 40-year-old woman, Chinyere Okechukwu, for allegedly stealing and selling a five months’ old baby for N900,000 to a couple in the state, Njenje Media News reports.

Okechukwu, who was running a child trafficking syndicate, reportedly went to Anambra State with a young man, Chiano, to marry the 20-year-old mother of the child, Onyechukwu Okafor, early this month.

Reports say after paying N50,000 as the bride price of the single mother, the suspect also paid an extra N50,000 as money spent on hospital bill during the birth of the child. She had afterwards taken the mother to Lagos and sold the child to a couple, Happiness and Paul Ibebuilo.

Narrating her ordeal in the hands of the syndicate, Onyechukwu said:

“My troubles began five months after I had my baby Chimunanya out of wedlock. Chiano, who’s a friend and lives in our community, and Chinyere Okechukwu came to ask for my hand in marriage.”

“Within the week after necessary negotiations with my family, they paid my dowry and a few days later I had to travel with them back to Lagos. On the day of our trip, my supposed husband wasn’t there, when I asked, Madam Chichi told me he had been transferred at his place of work from Lagos to Abuja, and had to go ahead of us.”

“On our way she bought a juice for me, which I drank by the time I woke up I didn’t find my baby. Immediately I began to ask for my baby, Madam Chichi said my baby was with her sister. When we got to Lagos, I was lodged in a hotel, at Abule-Ado.”

“That was when I suspected a foul play and had to call my cousin, Akubuko Obinna, who came to my rescue. I didn’t know they have sold my baby already. Madam Chichi kept saying, tomorrow, they will reconnect me with my child. It was after the police got involved that the woman who bought my baby was contacted and my baby retrieved and handed over to me.”