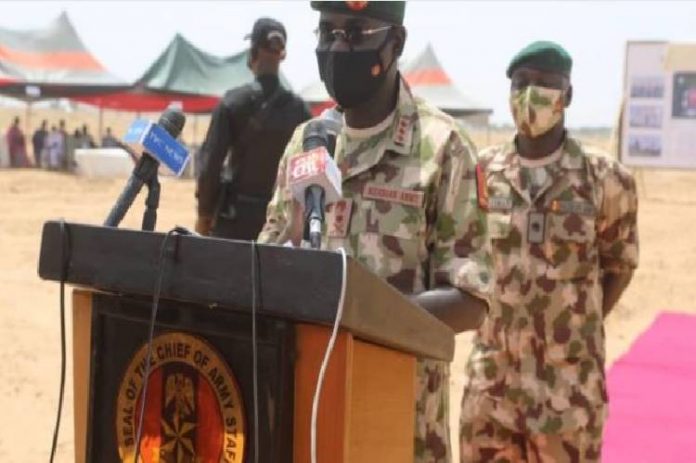 The Chief of Army Staff, Lt Gen TY Buratai has praised and commended the Commander, Officers and all the gallant troops of the Nigerian Army 4 Special Forces Command Doma Nasarawa State for their gallantry and patriotism that manifested in the destruction of Darul Salam/Boko Haram terrorists’ camps in Kogi and Nasarawa States recently.

In a statement issued by the acting army public relations officer, Sagir Musa, the Chief of Army staff applauded the hard work and resilience of the troops and the supports of the Nigerian Navy and Airforce as well as other security agencies that led to the destruction of the terrorists’ camps and their hideouts in Kogi and Nasarawa States thereby neutralizing several Boko Haram and Darulsalam terrorists and over 700 family members and abductees were rescued.

Gen TY Buratai commended their success and also charged them to never allow criminals and insurgents a foothold in the whole of the North Central Zone. He urged them to continue dominating the area and maintain a high standard of professionalism and never again allow the terrorists any breathing space or freedom of action in the discharge of their legitimate duties.

The Chief of Army Staff assured them of his continuous support to enable them to continue the good work as directed by the President Commander in Chief, President Muhammadu Buhari.