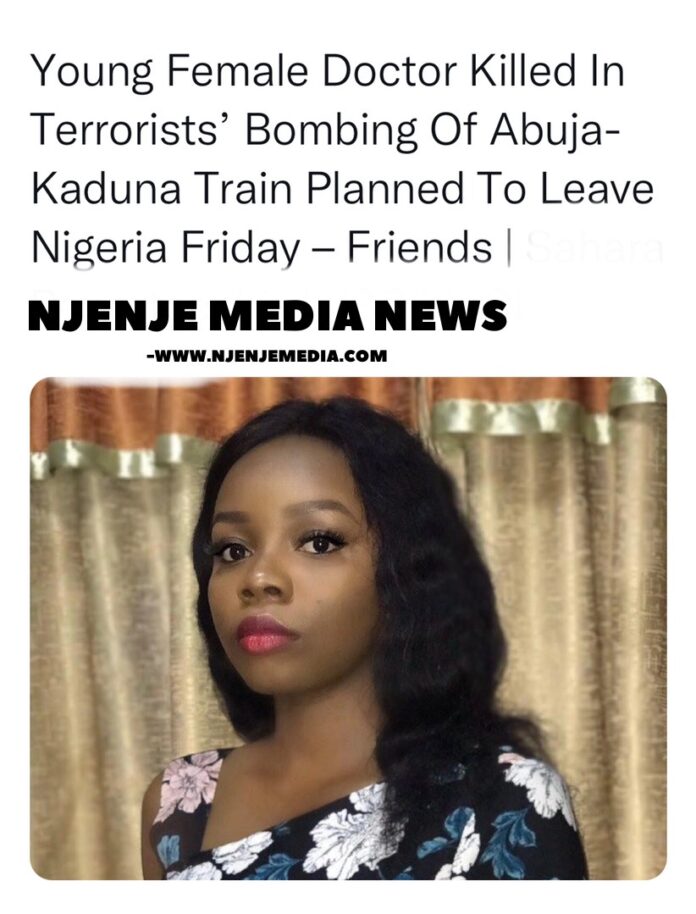 Some Nigerians on Twitter are mourning the death of a medical doctor, Chinelo Megafu, who died from injuries sustained during the terror attack on the Abuja-Kaduna train late Monday, NjenjeMediaNews reports.

Chinelo had tweeted during the attack, saying she had been shot and asked for prayers.

She tweeted, “I’m on the train. I have been shot. Please pray for me.”

A colleague of hers, Dr Michael Ajidahun better known as The Bearded Dr Sina on Twitter shared the sad news of her death.

He said, “My friend just woke up to losing a close friend who was shot at the Abuja Kaduna train incident by terrorists. She tweeted yesterday that we should pray for her. Sadly she didn’t make it. She was a Doctor. Nigeria why…I’m heartbroken.”

According to PUNCH Online, Dr Sina said that the victim died at the hospital where she was taken to.

He said, “She studied Dentistry. She was travelling in the Abuja-Kaduna train and had tweeted that she had been shot but some people thought she was tweeting for clout.

“A mutual friend, who is a doctor at the hospital where she was taken to confirmed she had died this morning.”

Tweeps have expressed their grief at the death of the doctor.

Jamila Motunrayo tweeted, “The first tweet I saw this morning. May her soul Rest In Peace.”

Chance said, “She only asked for prayers. Prayers and what most could offer was abuses or calling her a liar. May her soul rest in peace.”

Cross tweeted, “Rest In Peace doc. Only God know the pain you were in while tweeting this. Nigeria happened again.”

Jowo lamented how human life had ceased to have value in the country. She said, “The fact that human life is not worth more than a domestic animal these days, is a testament to how we’ve failed as a country and as a people. The news of death no longer hits as hard as it used to, it’s become a norm these days. Rest in peace Chinelo.”

Dr Megafu, a Dental Surgeon, graduated from the University Of Port Harcourt in 2016.