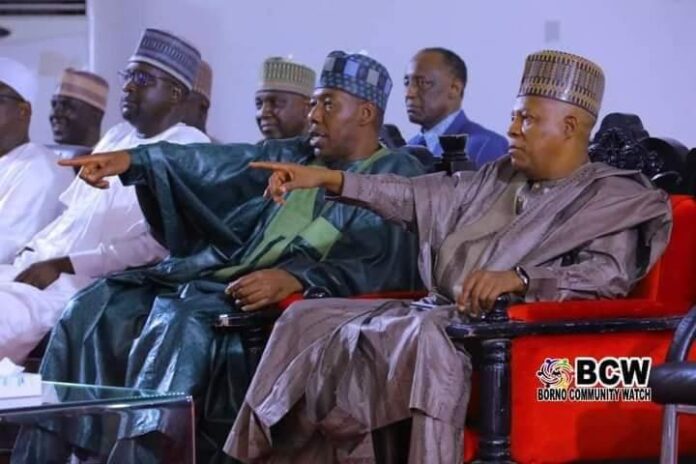 The ruling All Progressives Congress (APC) members in Borno state yesterday resolved and adopted consensus in the selection of party executives from ward to state level.

The State Deputy Governor,  Alhaji Umar Kadafur moved the motion for the adoption of consensus after deliberations at the stakeholders meeting.

The motion was seconded by one, Hon. Abdu Musa before it was put to voice-vote where all stakeholders including members of National Assembly, State Assembly and Council Chairmen unanimously agreed.

Earlier in his address, Gov. Babagana Zulum urged stakeholders to ensure that party rules and regulations were strictly observed in the coming congresses.

Zulum noted how non-compliance with party rules and regulations in some states resulted in litigations that affected the chances of APC in the last general election.

Reacting to the development, the Chairman of the ruling party, APC, Hon Ali Bukar Dalori said; ” The unanimous agreement by members of the party to opt for consensus is not surprising, as it was in line with good and transparent leadership across the state.”

Also Speaking, the former governor of the state who participated in the meeting, Sen. Maina Ma’aji, said the consensus method remains the best and would further unite and make the party strong in the state.

Ma’aji said stakeholders were satisfied and convinced that there was no desire by the governor or apex leadership of the party in the state to impose their will or candidate on the party.

Also speaking, the immediate past governor of the state, Sen. Kashim Shettima, said they resolved as a family to adopt the consensus which is allowed by the party constitution.

“Be rest assured that the leadership that will emerge would be all-inclusive and all-embracing.

“All segments of our party will have a sense of belonging. We have always acted as one political family in Borno,” Shettima said.

In his contribution, Sen. Ali Ndume also said that consensus is the best way to go and that they were hopeful of things going smoothly.

“In Borno, we are used to it. We have good leadership and unity among us,” Ndume said.

In his submission, the former Secretary of Defunct All Nigeria Peoples Party (ANPP) in Borno state, Hon Yusuf Adamu said, “The All Progressive Congress, APC in Borno state has shown that there is unity among party members, which is a clear indication that the leadership under governor Babagana Umara Zulum is carrying everyone along on the decisions taking to shaping the future of the party in the state and to have others emulate a good example from Borno state.

“The exemplary demonstration of the stewardship of the governor Zulum administration and advice from party leaders like the former governor Senator Kashim Shettima, senators representing northern Borno – Abubakar Kyari and Senator Muhammed Ali Ndume of southern Borno as well as members of the house of representatives and stakeholders have spoken well of the party as it prepares for the coming Congress.

“The outward demonstration of maturity and agreement that gives birth to a peaceful meeting of party members is an indication that APC in Borno state has come of age and standing as a true democracy,” Adamu stated.