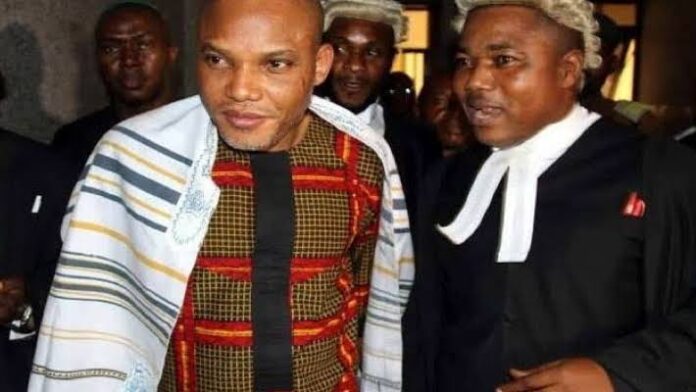 The Federal High Court Sitting in Awka, Anambra State, Per: Honourable Justice H. A. Nganjiwa of Court No. 1, this morning, delivered a landmark Judgement in a Fundamental Rights Enforcement Suit filed in Suit No: FHC/AWK/CS/56/2021 Between:

1) In this landmark Judgement delivered this morning, being the 22nd day of July 2022, the Learned Erudite Judge held and consequently, declared the brutal invasion of my ancestral home in Oraifite on the 6th day of June, 2021, by the agents of the 1st, 2nd, 3rd, 4th, 6th, 7th and 8th Respondents as oppressive, and gross violation of my rights to life, dignity of human person, fair hearing, right to private and family life etc.

2) His Lordship further declared as illegal, oppressive and unlawful, the taking away and subsequent burning of my Toyota Car with Registration No. YAB 60 CB together with the dead body of Mr. Samuel Okoro, and other vital documents and valuables seized from my house by the agents of the 1st, 2nd, 3rd, 4th, 6th, 7th and 8th Respondents.

3) The court further made Order and consequently, restrained the 1st, 2nd, 3rd, 4th, 6th, 7th and 8th Respondents either directly or through their agents, privies, and howsoever called, from further harassing me, threatening, and/or taking further steps in an attempt to terminate my life and/or destroying my properties.

4) His Lordship further restrained the 1st, 2nd, 3rd, 4th, 6th, 7th and 8th Respondents either directly or through their agents, privies and howsoever called, from further harassing, intimidating, and/or threatening to illegally arrest and torture me.

5) The Court further awarded against the 1st, 2nd, 3rd, 4th, 6th, 7th and 8th Respondents jointly and severally, the sum of ₦100,000,000.00 (ONE HUNDRED MILLION NAIRA) as Compensatory and General Damages in my favour, for the gross violation of my fundamental Rights.

8) The Learned Judge further directed the 1st, 2nd, 3rd, 4th, 6th, 7th and 8th Respondents, to issue Public Apology to me in TWO NATIONAL Dailies, for the gross violation of my Fundamental Rights.

9) In further condemning the dastardly act of the Respondents/their Agents, His Lordship further directed the Inspector General of police, the Chief of Army Staff, and the Director General of State Services to immediately identify their personnel involved in this gruesome act and appropriately sanction them in line with the extant laws.

You will recall, in summary, that on the 6th day of June, 2021, being a Sunday, at about 2:30am, my peaceful home in Umunakwa Ifite, Oraifite, Ekwusigo Local Government Area of Anambra state, was invaded by the combined team of DSS operatives, the Police, the Army and the Civil Defence, during which murderous invasion, my Personal Assistant (Mr. Samuel Okoro) was murdered in cold blood by these monsters in security uniform.

These monsters did not stop at that, they proceeded to take delivery of his corpse, dumped same in my Toyota Car booth. They also abducted three of my domestic staff, namely:
i. Mr. Okafor Lawrence Ugochukwu (my gardener),
ii. Mr. Felix Okonkwo (my driver), and
iii. Mr. Ikenna Chibuike (my steward), before they hurriedly left.

My elder brother (Mr. Joel Ejiofor) was equally abducted in the process, but was later pushed out around Nnobi by the invading troops, before they left with my domestic staff and the corpse of Mr. Samuel Okoro.

These Marauders briefly stopped at Neni town in Aniocha L.G.A. of Anambra State, immediately after Okacha Filling Station, where they set my car ablaze with the corpse of Mr. Samuel Okoro inside.
You may wish to watch the attached video clip and refresh your memories on the height of wickedness, and man’s inhumanity to man.

What was my offence to deserve this level of brutality? No explanation.
All the petitions I wrote to the heads of security agencies including the DSS, the Police and the Army for a thorough investigation of this dastardly act were never attended to. Rather, all the security agents involved in these crimes against humanity have maintained sordid/disturbing silence till date.

Today, Justice has prevailed and there is no hiding place again for any of those perpetrators, because this judgement must be executed to the letter.

Interestingly, I can now authoritatively confirm to the whole World that the three of my domestic staff abducted during this bloody invasion of my ancestral home as earlier named, are being detained in solitary confinement at the facility of the DSS National Headquarters, Abuja. Even though the DSS have repeatedly denied both in their Court affidavits and every of their correspondences, of holding my domestic staff, compelling evidence available at our disposal is irresistibly pointing to the fact that they are being held in the DSS facility, which evidence was equally submitted before the Court.

May I respectfully, and strongly relying on the strength of this Judgement, call on the Director General (DG) of the Department of State Services (DSS), Abuja, to immediately direct for the unconditional release of my above named domestic staff being held in their custody, and accordingly, comply with all terms of this judgement.

Further to this demand, may I remind the DG of the DSS, who is also a party to this suit, and well represented throughout the proceedings giving rise to this Judgement, to, in compliance with the positive Orders of the Court, direct for the immediate arrest and prosecution of the DSS personnel involved in this bloody invasion of my ancestral home. I had before now, forwarded to the DSS, a clear clip of the CCTV footage of this bloody invasion of my ancestral home, which showed the clear view of the invaders, as it would enable the DSS to identify their personnel involved, for necessary action.

Judgement will soon be delivered on other sister separate Suit, which I filed to challenge the extrajudicial killing of my Personal Assistant, Mr. Samuel Okoro, as well as other grave infractions.

May I seize this medium to most sincerely, thank my hardworking staff, professional colleagues, Ezigbo UmuChineke, friends, the Press, family members and relatives for their various roles towards ensuring that justice prevailed in this case.

It is my honour to specially recognize the efforts of our indefatigable Head of Chambers, Chinwe Umeche, Esq., whose legal prowess was compelling in getting to this stage. Also, on the list are my erudite colleagues in Chambers, who never let me down in their various roles.

I cannot conclude without mentioning Barristers Augustine Ezeokeke, Habila Turshak, Barbara Onwubiko, Udoka Nwanku, and my other wonderful colleagues in Chambers who were relentless in ensuring that we get justice.

My special thanks goes to my erudite Client and brother, the indefatigable Leader of the Indigenous People of Biafra (Onyendu Mazi Nnamdi Kanu), whose comforting words brought me back from depression, at that critical time. The list is endless, but please be rest assured that I deeply appreciate all your support and efforts. May you all remain richly blessed by the Almighty ChukwuOkike Abiama.

I return all the Glory to the most High God, who has continued to sustain and keep me alive, because the intendment of the enemies was to eliminate me in the process, but the anointed hands of God has always been upon me.

Thank you all and and please join me in thanking the Almighty God for this deserved victory.

Surely, there is light at the end of the tunnel and this is a ray of hope for more victories ahead.