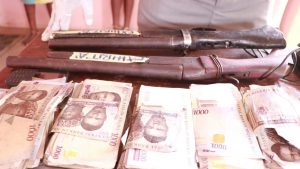 Officials of the Department of State Service (DSS) have paraded a six-man syndicate including a nursing mother that specialises in kidnapping of toddlers in Ondo State, Njenje Media News reports.

The Director of DSS in Ondo State, Jonathan Kure, while parading the suspects, said the syndicate have been terrorising the state by kidnapping toddlers between the ages of two and four years.

He noted that the nursing mother who was a member of the kidnap syndicate, also helped to keep weapons for members of the group.

The DSS Director said the woman is the wife to one of the arrested kidnappers.

He said further investigation would continue, adding that the suspects would soon be charged to court.

The State Deputy Governor, Lucky Aiyedatiwa, while speaking on the development, assured indigenes and residents of the state of adequate security of their lives and property.