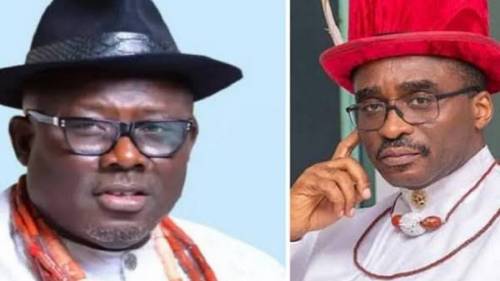 The Independent National Electoral Commission (INEC) has written to the Peoples Democratic Party (PDP), over the judgment by Justice Taiwo O. Taiwo of the Federal High Court, Abuja on the election of Sheriff Oborevwori said to be Governor Ifeanyi Okowa’s stooge as the party’s governorship candidate in Delta State.

The court had nullified the election of Oborevwori after David Edevbie, who scored the second highest votes in the PDP’s governorship primary election, approached the court seeking disqualification of Oborevwori for submitting fake credentials to the INEC., NjenjeMediaNews reports.

Justice Taiwo in the suit No: FHC/ABJ/CJ/795/2022 on July 7th, ruled that Oborevwori was not qualified to participate in the process, let alone being declared the winner, having supplied false information and submitted forged credentials/certificates.
Following the judgment, Edevbie through his counsel wrote to the INEC, urging the electoral body to comply with the court order by replacing Oborevwori’s name with his name without further delay.
In a letter addressed to the National Chairman of PDP dated July 18, 2022 and signed by the secretary of the commission, Rose Oriaran-Anthony, acknowledged receipt of the order served by the court.
The letter with re: Suit No. ‘FHC/ABJ/CJ/795/2022 between David Edevbie V. Oborevwhori Sheriff Francis Orowedor and 2 Ors’, read, “This is to draw your attention to judgment Order of the Federal High Court of Nigeria, Abuja in the above-mentioned suit which has been served on the Commission.
“While hoping your party takes note of the judgment Order, please accept the assurance of the Commission’s warm regards.”

RELATED POSTS:  I will expand the political space for women to realise their true potential - Valentine Ozigbo