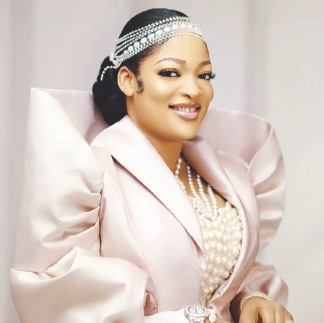 When in 2021 Naomi Silekunola Ogunwusi took the decision to walk out of the Oonirisa Palace in Enuwa, Ile-Ife as the sole Olori to revered Oba Enitan Babatunde Ogunwusi, many were taken aback over her decision to quit the three-year old marriage.

That singular action drew the anger of naysayers and it has led to so much afterwards. Of course, so many controversies have trailed her life outside the Palace but the 29-year old former Queen who left with her dignity intact hasn’t looked back.

She has remained focused on raising her adorable two-year old son —Prince Tadenikawo— and devotes more time to her evangelical activities and NGO with a leading mission to develop more women and girls through various forms of empowerment and advocacy.

Naomi is the founder and president of Akure, Ondo State-based evangelical ministry —En-Heralds Interdenominational Ministry— and also the Convener of Women In Need of Guidance & Support (WINGS), an NGO.

Spotlight gathered that also as part of her resolve to continue with her life without interruption, the former Yeyeluwa of Ile-Ife is on a path to further greatness as she has gone back to school to improve on her educational attainment.

The Ex-Olori, we learnt, is now an undergraduate student of Elizade University, Ilara-Mokin, Ondo State —she’s to study for a Bachelor’s Degree in International Relations.

She was a former undergraduate student of the Adekunle Ajasin University, Akungba-Akoko but had to drop out for the rigours of evangelism that took toll on her then. Naomi had to forfeit that admission to work for God but with the latest development in her life, the mother of one has resumed as a fresh celebrity student of the private university.