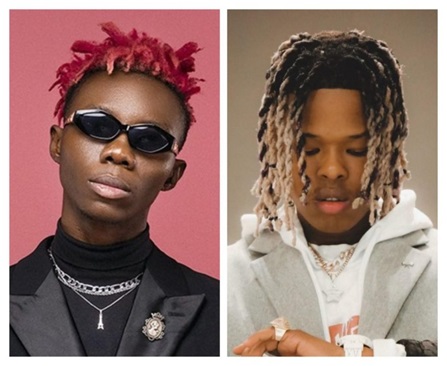 The Nigerian fast rising rapper and hip hop mogul have been gaining massive recognition lately and such lots of fans have been diving in on bestowing him the best rapper in Africa, and some drawing the comparison between him and the multiple awards wining South African rapper Nasty C, Njenje Media News reports.

It’s clear that with all the individual honors, awards and achievements the young SA hip hop prodigy and rapper have bagged over the years, it’s easy for fans to compare him with many other African upcoming rappers. Taking to twitter, Nasty C was compared with Nigerian rapper BlaqBonez a comparison that prompted massive reactions on Twitter timeline. “Who is the best rapper? Like for Nasty C Retweet for Blaqbonez,” read the tweet.

This caused massive reactions among fans on social media as some called that as a disrespect to the Durban-native rapper. Some stating that the Nigerian rapper Blaqbonez whose real name is Emeka Akumefule is not even the best rapper in Nigeria talk more of in Africa before linking him alongside Nasty C.

Even though most Nigerians don’t agree that BlaqBonez is not yet at the same level as Nasty C, the rapper has been one of the shining stars in Naija music. Blaqbonez has released three EPs since 2018, including Bad Boy Blaq (2018), Bad Boy Blaq Re-Up (2019), and MrBoombastic (2019), as well as a number of singles that have freely veered between hip-hop, afrobeats, amapiano, afro house and r&b.

Recently BlaqBonez also have enjoyed Nasty C’s contribution to his 2021 studio album where they joined efforts on a single titled “Heartbreaker” which gained massive recognition and impact in the Nigerian and South African music industry. He also had other features from Joeboy, Amaarae, and Bad Boy Timz on the said project.

Nasty C whose real name Nsikayesizwe David Junior Ngcobo has enjoyed fame for almost a decade in the hip-hop game while Blaq’s career took a good turn during the lockdown and 2022 seems to be a great year for him.

Due to the emergence of Bonez’, especially with the success of his debut album, Young Preacher, a few social media users have started a debate on who is better, better the two rappers.

“Blaqqbonez is good no doubt but he’s no touching Nasty C anywhere. Blaqq has never performed in any foreign award show, he has never been recognized by the black culture worldwide sef. Y’all just capping rubbish. Wait where u won even put Sarkodiesef. Rubbish talk upandan,” a tweet wrote.

However, since many perceived the debate as an insult and disrespect to Nasty C, it was then cancelled as many fans were dragging for the tweet to be taken down, and should only be up when the Nigerian rapper have bagged half of Nasty C’s awards.