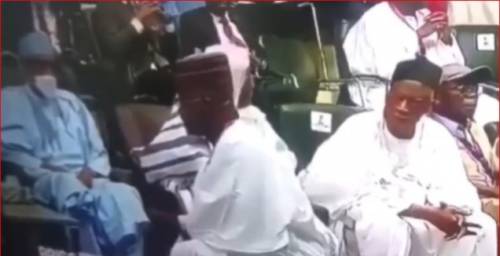 The Kogi State Governor, Yahaya Bello, on Tuesday night snubbed the National Chairman of the All Progressives Congress, Abdullahi Adamu during the national convention of the party at the Eagles Square, Abuja.

In a video seen by NjenjeMediaNews, Bello refused to shake hands with Adamu while he shook hands with three of his predecessors, Adams Oshiomhole, Bisi Akande and John Odigie-Oyegun.

The governor was also seen greeting President Muhammadu Buhari and First Lady, Aisha.
A special convention to elect a presidential candidate for the APC in the 2023 general election is ongoing at the Eagle Square.
The run-up to the special convention had been marred by intrigues over the zoning of the presidential ticket and consensus candidacy.
Adamu had picked the Senate President, Ahmad Lawan, as consensus candidate of the party.
Bello, who is one of the contenders, had kicked against the action of the APC Chairman.

He also failed to withdraw from the exercise despite the demand of his colleagues from the North that an aspirant from the South region should be supported to clinch the ticket.
Meanwhile, counting of votes is ongoing at the All Progressives Congress special convention in Abuja where the 2023 presidential candidate is being elected.
SaharaReporters observed that voting by the 2,322 delegates ended around 7.30am, while counting had now started.
President Muhammadu Buhari left Eagle Square, venue of the convention, at about 1.20am on Wednesday before the commencement of voting.
Before his departure, Buhari told the party members to remain united and avoid acrimony.
The ruling party has been in turmoil since the national chairman attempted to impose a consensus candidate on the party.
Meanwhile, 11 northern APC governors stood their ground and announced their decision to zone the presidency to the South.
The party’s three-day special national convention began on June 6 and will climax with the election of a presidential flag bearer today.