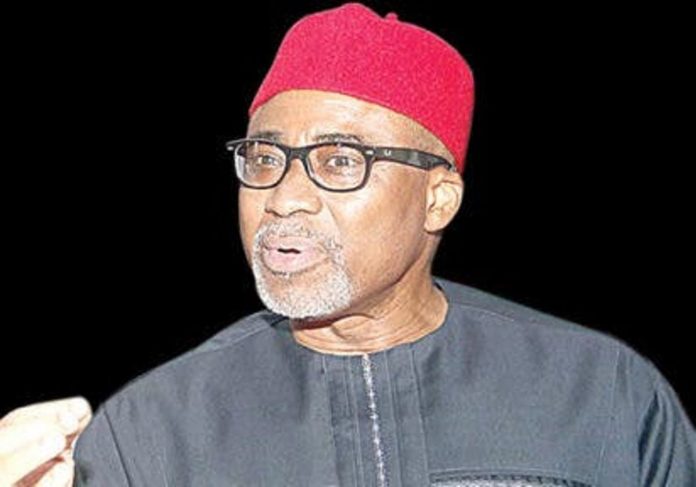 How I survived three impeachment under Orji Kalu’s administration – Abaribe

….says his trouble started when he failed to join league of “Egusi” peelers in Orji’s mother house.

Abaribe in his book titled “Made in Aba” which will be officially launched on March 1, 2023 at the Yaradua Centre, Abuja added that his trouble started with Senator Kalu when he failed to join the league of “Egusi” peelers that thronged to his mother’s abode for whatever reason.

According to him, I was just not toadying to Orji Uzor Kalu enough, That was my greatest undoing. I was not in the league of “Egusi” peelers that thronged to his mother’s abode for whatever reason. His minions had not succeeded in binding me to some ethereal commitment on any false loyalty scale.

Explain how he survived three impeachment, Abaribe in his book, said, ” I lasted exactly three years and nine months in office, before I threw in the towel. The bumpy ride ended on 7th March, 2003 , when I finally resigned and switched parties.

” The one tenure was characterised by three attempt at impeachment. The one thread that runs through them all, is that government can make no error.

“Once the idea stuck in the head of the chief executive, person around him would leave no stone unturned to actualise the desired end. It ties in with the inability to take responsibility for action, and drives the unwary to that inevitable hubristic manifestation described by Owen. The leader is always right, “Animal Farm” complex.

” The first attempt at impeaching me, died on the floor of the House of Assembly, roundly defeated for the baseless shenanigan that it was.

” The second attempt, I survived, by a hair’s breadth: by just one vote differential. The third, I did not bother to respond to. “

He added that during Orji Kalu’s administration , two other Deputy governors after him were impeached and removed from office.

He said during his crisis with Orji Kalu, the then President Olusegun Obasanjo and Senate President, Dr. Chuba Okadigbo, intervened separately, but nothing come out of it.

He explained how he was dehumanised by Kalu in one occasioned which gained him friendship of Chief Emeka offor.

“The Senate President. Dr. Chubs Okadigbo, also intervened. He called me out to apologise to Orji Uzor Kalu, in public, digressing from the project of road commissioning he had come for.

“I had for the sake of peace, humbly stepped forward. The governor did not reciprocate the gesture. But, everyone witnessed the coldness he exhibited towards me on that occasion and was able to judge whether the trouble between us was as a result of Abaribe”s convoluted pride, or whether it was a reflective of something more sinister that “hubris syndrome!

“My dehumanisation by Kalu on that occasion, gained me the friendship of Chief Emeka Offor, who was part of the crowd at the said commissioning.

“Chief Offor had approached me quietly, with a complimentary card, expressing his astonishment at the childishness of a governor, who would openly shun reconciliatory gesture. “