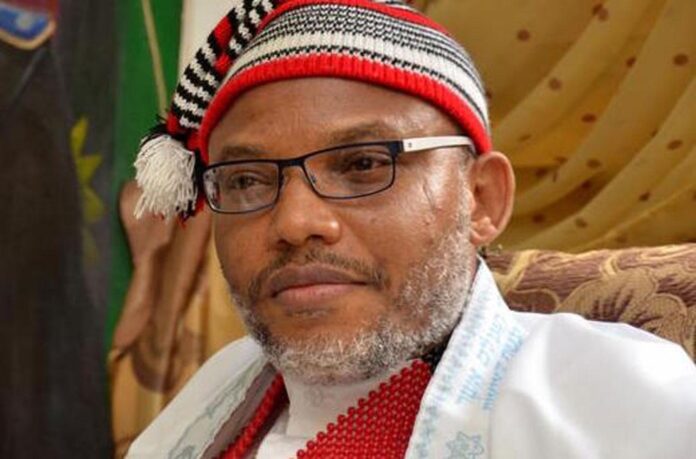 Mr. Ifeanyi Ejiofor, The lead counsel to the detained leader of the Indigenous People of Biafra, (IPOB), Nnamdi Kanu, on Wednesday, denied insinuations that the Nigerian Government has moved his client to India, Njenje Media News reports.

Ejiofor, in a statement he issued through his verified Facebook page, said contrary to the report which he described as “fake news”, he held a pre-trial briefing with the embattled IPOB leader last Monday, with another visit scheduled for Thursday.

Maintaining that FG would have no choice but to produce Kanu in court on October 21, Ejiofor, urged all his supporters not to get distracted, but to intensify their prayers and supplications to God.

The statement entitled “Important Notice”, read; “Please Umuchineke (children of God), and teeming  followers of Our indefatigable Client-Mazi Nnamdi Kanu,  this time should not be for any form of distraction.

“You all should rather be intensifying in your prayers and supplications to Almighty Chukwuokike Abiama as the D-Day gradually approaches.

“Do not give in to mischief makers who are currently parading FAKE NEWS that Our Client Onyendu Mazi Nnamdi Kanu, has been transferred to India for whatever mischievous purpose they are insinuating.

“We were with him on Monday for pre-trial briefing and will still be with him tomorrow.

“Please your eyes should always be on the ball, do not be distracted at all.

“Remain strong in spirit, and continue in your prayers and supplications.

“The Federal Government has no choice but to bring Onyendu Mazi Nnamdi Kanu to Court on the 21st Day of October, it is an explicit order of  Court. “Thank you all and remain blessed”.

It will be recalled that despite heavy security that was mounted at the Federal High Court in Abuja on July 26, the Department of State Services, DSS, failed to produce the detained IPOB leader for continuation of his trial.

Government lawyer, Mr. Mohammed Abubakar, had blamed the inability of the DSS to produce the Defendant in court on what he termed as “logistical difficulties”.

Kanu, who was on June 27, returned back to the country after he was reportedly arrested in Kenya, is facing a treasonable felony charge the FG preferred against him.

Trial Justice Binta Nyako had on June 29, remanded him in custody of the DSS.

The Defendant had since filed an application to be transferred from DSS custody to a Correctional Center, accusing the security agency of denying him access to his lawyers and medical doctor.

He said he might die in custody of the DSS if nothing was done to urgently address his deteriorating health condition.

Though his application has not been heard, trial Justice Nyako however ordered the DSS to grant the Defendant access to his lawyers every Monday and Thursday of the week.

FG had in a four-pragraphed counter-affidavit dated July 9, FG, opposed Kanu’s application to be transferred to a Correctional Center.

It told the court that Kanu is still under investigation over offences he committed after he jumped bail and escaped from the country.

FG alleged that the said offences bordered on national security.

“That there is ongoing investigation as to other offences committed by the Defendant/Applicant while jumping bail.  “That the alleged offences borders on National security.

“That transferring the Defendant/Applicant to the Correctional facility will jeopardize the investigation of the offences.

“That the Defendant/Applicant does not place anything before this Honourable Court that suggest the medical facility available at the DSS detention is not capable of handling his health issues.

“That the Defendant/Applicant’s application is capable of delaying the proceedings in this case”, read the counter-affidavit that was deposed to by one Loveme Odubo, a litigation officer in the Federal Ministry of Justice.

FG had in the charge already pending before the court, alleged that Kanu imported Radio transmitter known as TRAM 50L, which was concealed in a container that was declared as used household items, for the purpose of using same to disseminate information about secession plans by the IPOB.

It alleged that Kanu, “on or about the 28th April, 2015 in London, United Kingdom did in a broadcast on Radio Biafra monitored in Enugu, Enugu state and other parts of Nigeria within the jurisdiction of this honourable court, referred to Major General Muhammadu Buhari, GCON, President and Commander in Chief of the Armed Forces of the Federal Republic of Nigeria as a paedophile, a terrorist, an idiot and an embodiment of evil, knowing same to be false and you thereby committed an offence contrary to section 375 of the Criminal Code Act, Cap C. 38 Laws of the Federation of Nigeria, 2004”.

He was alleged to have committed treasonable felony, an offence punishable under Section 41(C) of the Criminal Code Act, CAP C38 Laws of the Federation of Nigeria.

FG alleged that Kanu and the other pro-Biafra agitators were the ones managing the affairs of the IPOB which it described as “an unlawful society”.

Kanu was alleged to have illegally smuggled radio transmitters into Nigeria, which he used to disseminate “hate broadcasts”, encouraging the “secession of the Republic of Biafra”, from Nigeria.