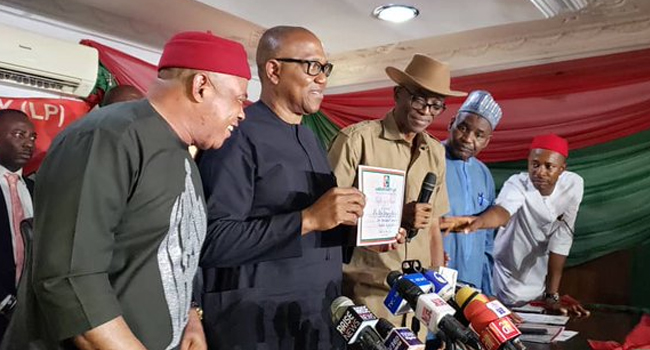 The Labour Party on Wednesday released a revised list of its Presidential Campaign Council comprising 1, 453 members.

Dr Doyin Okupe remains the Director-General of the campaign council while retired Assistant Inspector General of Police, Mohammed Zarewa remains the chairman of the council.

National Chairman of the party, Barr Julius Abure, in a statement announcing the revised list, said the earlier list released on October 12 had to be reviewed to accommodate those who were “displaced” from the list.

Abure appealed to supporters of the party who are not in the latest list to “continue to do their work.”

The statement reads: “So the list is ready. I have the honor and privilege to present it to the press. The list of the committees is also available. They are available on our websites both the party’s website and the campaign websites. So members are free to look at this list. And then those who can’t be at the inauguration on Friday can do so. I will share the link later for those who may not be able to attend.

“I want to thank Nigerians for their support for the party and for our candidate. I want to appreciate all our candidates who have been working tirelessly to establish the party, who are working hard to win their elections.

“This is a call and it’s a patriotic duty that history has entrusted to us at this time. We all have acknowledged that the numerous challenges that we have in the country are a result of successive failed leadership over the years, and we believe that if we are able to solve the leadership problem in the country, and of course, every other thing will follow.”