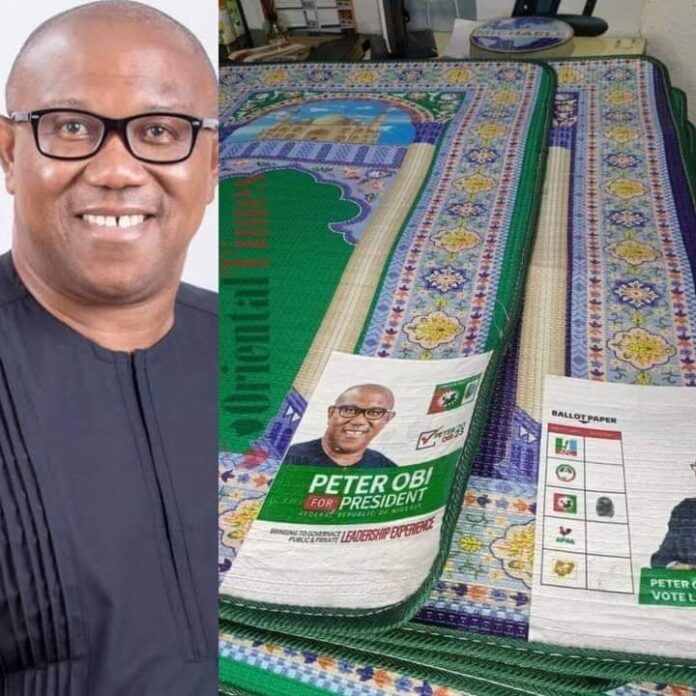 Few days ago, pictures of a prayer mat bearing Peter Obi’s picture went viral on the internet. To some of us, it was another good souvenir that promotes our presidential candidate, but to a number of Muslim faithful, that wasn’t good. In fact, a Muslim friend called to suggest that those behind that action might actually be aiming to bring Peter Obi at loggerheads with our Muslim brethren. He explained to me that any good Muslim who understands Islamic exhortations on prayers wouldn’t dare use that mat. That was a lot of lesson in just one phone call. We learn everyday.

Almost as I was getting off the phone call with the intention to immediately raise the issue within our POSN enclosure, I was alerted to a tweet from the incoming President, where he repudiated, in the clearest, yet kindest words possible. He made it clear that the action which might be well-intentioned, didn’t emanate from his Campaign Organization, but probably from one of his many support groups that are looking for independent, yet effective ways to sell him to Nigerians of all cultures, tribes and religions. But, in that very short tweet, he reaffirmed his philosophy on respect for our diverse religions and need to promote unity and tolerance.

When you sit down to analyze that very short note, you will understand how significant it is and the lessons derivable from them; to especially; public commentators and political leaders.

The promptness of the response has gone a long way in arresting what could lead into serious misunderstanding, especially among our Muslim brethren. And the careful selection of words deployed in that communication left nothing to guestimation. He made it clear that he understands and respects the sensitivities of our various religions and their adherents and that he is the type of leader who will not shy away from taking responsibility for any action. It would have been easier for him to disown those who made those mats as unknown to him, but while rejecting their action, he still did not make them feel irrelevant. He accepted that they are his supporters and that their actions could be well-intentioned, but that he didn’t and couldn’t have authorized such, which he understands could be misconstrued as maligning the Muslim faith.

The frontline presidential candidate continues to demonstrate that he is the most prepared; mentally, temperamentally and experience wise to become Nigeria’s President at this time in our history. More than any other thing, Nigeria needs a President who understands Nigeria and who has the right temperament to ensure that we manage our diversities well.

With this repudiation, Nigerians of good conscience have come to know that Peter Obi is a candidate of the masses, and different people and groups wake up everyday thinking of how best to make this beautiful dream of a great and working country, come to reality.