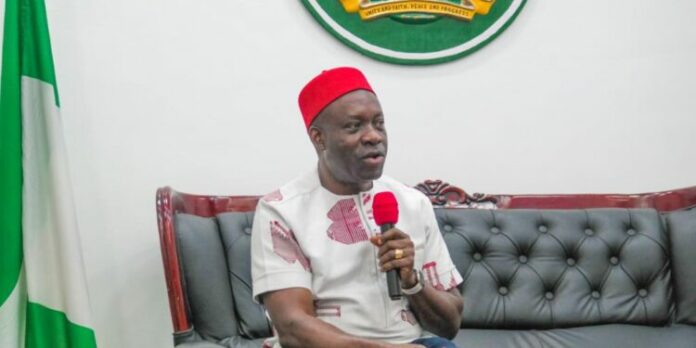 Anambra State Governor, Professor Chukwuma Charles Soludo, has charged the state contingent to the National Sports Festival, in Delta State to be good Ambassadors and to uphold the dignity of the state in character and sportsmanship, Njenje Media News reports.

The governor gave the charge at the Archbishop A.K. Obiefuna Retreat Pastoral and Conference Center, Okpuno – Awka South Council Area where Team Anambra gathered before departure for Asaba for the festival. Soludo who was represented by his Chief of Staff, Mr. Ernest Ezeajughi described Anambra as an ‘A’ state and urged them to go out and make Anambra proud.

“We have done it before! The State Ambassador, Mary Onyali whom you all know, conquered the world.

“If these great ndi Anambra have done it, why not you? The good news we are expecting to receive after your two weeks stay at Asaba is for you to arrive with laurels. “In the past one month, few Anambra Teachers and Students have made the state proud in the education sector.

“Last week, the festival torch was brought from Enugu to Anambra at the Dr. Alex Ekwueme Square Awka, where the Deputy Governor, Dr Onyekachukwu Ibezim represented the State Government.

“The appointment of Mr. Patrick Onyedum as Chairman of Anambra State Sports Development Commission by Governor Soludo attests to his commitment to transforming the sports sector. “Mr Patrick is deeply involved in the field of sports; a former Athlete and Chairman of Anambra Athletics association.

“You have the best hand at your disposal with loads of packages on sports. Go out there and do the needful. We will support you”, he concluded.

Earlier in a speech, the Chairman, Anambra Sports Development Commission, Mr. Patrick Estate Onyedum expressed confidence in the youths and reminding them that Anambra is the Light of the nation, he spurred the youths to be the bearers of light, put in all their best and makes the state and their families proud.

In his remarks, the 100M race sprinter, Anyadiegbu Kenechukwu promised Governor Soludo that the Anambra Team are going all out for gold to make the State proud particularly themselves for personal development in their sports career.

He advised his colleagues not to let money be their driving force but rather, passion for excellence.