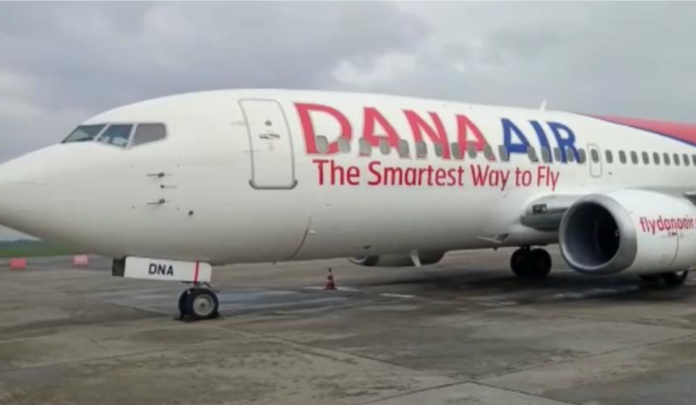 Aviation regulatory body, The Nigerian Civil Aviation Authority (NCAA) has wielded the big stick on popular airline, Dana Air as it suspended its license, Njenje Media News reports.
NCAA in a statement said the suspension is with immediate effect, noting that Dana Airlines could no more conduct safe flight operations and meet its financial obligations.
In a statement signed by NCAA DG, Captain Musa Nuhu, the agency said a health audit was carried out by the authority, which informed its findings.
Read the statement below:
NEWS RELEASE

“The Nigerian Civil Aviation Authority (NCAA) has suspended Dana Airlines’Air Transport Licence (ATL) and Air Operator Certificate (AOC) indefinitely, with effect from midnight of Wednesday, 20th July, 2022.
“The suspension was made pursuant to Section 35(2), 3(b) and (4) of the Civil Aviation Act, 2006 and Part 1.3.3.3(a)(1) of the Nigeria Civil Aviation Regulations (http://Nig.CARs), 2015.
“The decision is the outcome of a financial and economic health audit carried out on the Airline by the Authority, and the findings of an investigation conducted on the Airline’s flight operations recently, which revealed that Dana Airlines is no longer in a position to meet its financial obligations and to conduct safe flight operations.
“The NCAA acknowledges the negative effect this preemptive decision will have on the Airline’s passengers and the travelling public and seeks their understanding, as the safety of flight operations takes priority over all other considerations.
(Signed) Captain Musa Nuhu Director General.