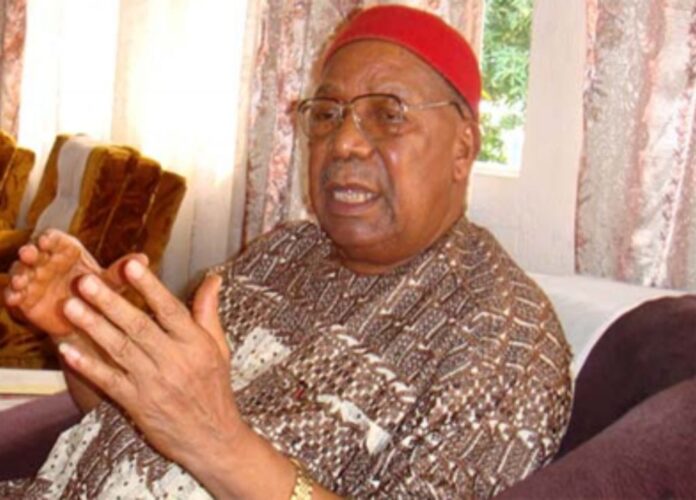 Ninety-three-year-old first Republic Aviation Minister, Chief Mbazulike Amaechi has said if for any reason the candidate of the Labour Party (LP), Mr Peter Obi, loses in next year’s presidential poll he (Amaechi) would conclude that God created Nigeria to suffer.

The nonagenarian stated this, weekend, at his country home, in a chat with select journalists while declaring his support for Obi and his running mate, Datti Baba Ahmed.

He warned that nothing untoward should happen to Obi ahead of the 2023 general elections, stating that Nigeria’s situation would worsen if anything happened to him (Obi).

He said, “I don’t think it was just an accident that Peter Obi emerged. I think it was God’s way. If anything happens to him, it would worsen the situation in Nigeria and the situation may degenerate to something non describable.

“If they’re afraid of Obi who is just a beginner, why should they not be eternally afraid? Peter Obi is the only governor who left office and nobody asked him any questions.

“He didn’t know the office of EFCC, ICPC or DSS because of his clean records. The man who succeeded him wanted to leave the country two hours he handed over, meaning he wanted to sneak away.

“Many other governors who left office have been arrested and charged to court but they ran into Senate or APC as a party and today their cases are closed. That’s the kind of rotten country you have. Yet people are suffering, and may continue to suffer.

“I don’t think God created us to continue to suffer. The 2023 election is an opportunity he’s provided for us to right the wrongs. You will see how the whole world will embrace Nigeria if Peter Obi wins the election and all the criminals and looters will melt away to Dubai.”

RELATED POSTS:  Nnamdi Kanu: Thank You For Not Bringing Him Back In ‘Body Bag’, Worried Over His Safety In Custody, InterSociety To Govt