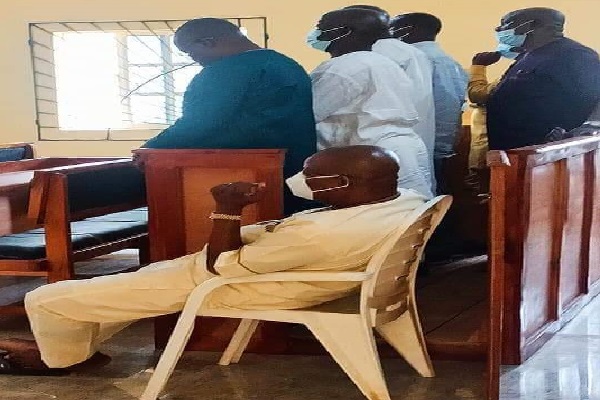 Ex-commissioner for Works and Transports Engr. Kazeem Salami; ex-Commissioner for Youth, Sports and Special Needs, Biyi Odunlade; former Special Adviser to the Governor on Taxation Barr. Gbenga Akano as well as Alaba Popoola and Azeez Adekunle were arraigned on three-count of conspiracy and assault.

The police prosecutor, Mr John Idoko, told the court that the defendants and others now at large on August 14th, 2021 around 1:30pm in Ogo-Oluwa area conspired to unlawfully assault one Hamzat Lukman Babatunde by hitting him with stones on his head.

He added: “The defendants assaulted one Ajetumobi Muideen ‘m’ by hitting him with parts of broken plastic chairs on his head, which caused him harm.”

Inspector Idoko noted the offences committed are contrary to and punishable under Section 516 and 355 of the Criminal Code Cap 34 Vol. Il laws of Osun State of Nigeria 2002.

All the suspected pleaded not guilty to the charges pressed against them.

The defence counsel, Muftau Adediran and Abdulfatai Abdulsalam prayed the court to grant bail to all the defendants in the most liberal term.

Presiding Magistrate, Dr Olusegun Ayilara granted Salinsile, Adebiyi, Salami, Odunlade and Akano bail with the sum of N5millon and self-recognition while Popoola and Adekunle were granted bail for N5million and one surety who must be a civil servant in the State.

The Nation recalls violence erupted at the APC secretariat while the Appeal Committee of Ward Congress was sitting on August 14th, 2021.

Two persons were injured during a clash between loyalists of Minister of Interior, Rauf Aregbesola and Governor Adegboyega Oyetola.

Anambra King Sues Subject For Not Addressing Him As ‘Igwe’