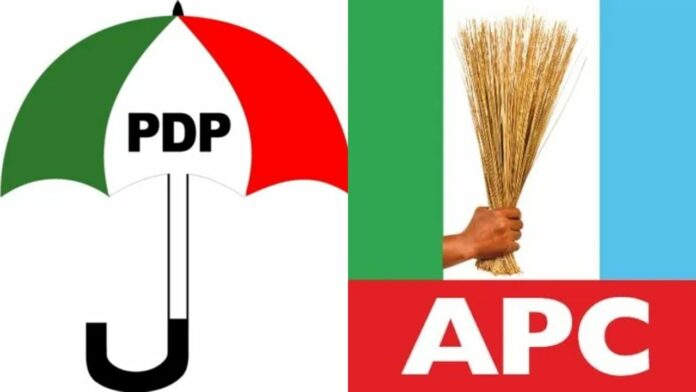 A disaster that replaced a tragedy, APC and PDP – Uzoma Ahamefule

Peoples Democratic Party (PDP) and All Progressives Congress (APC) are the two most dominant political parties that do not need introduction in Nigeria. The two parties have woefully piloted the affairs of the supposedly giant of Africa since 1999 to a state of regrettable moribund it is today as a sleeping giant. The names of these two parties sound cancerous, tragic, depict failure and activate horror to the ears of many Nigerians.

The reasons are not farfetched. Under PDP and APC every part of Nigeria bleeds, and nothing functions properly except corruption. With these two parties at the helm of affairs in Nigeria, contracts have been awarded at different occasions to contractors with 100% money paid, but the jobs were either never executed or shabbily done and no one was arrested.

Owing to the fact that EFCC has confiscated properties belonging to some members of APC and PDP for looting or criminal activities etc., and coupled with the fallacy of ships invisibly coming to steal crude oil in Nigeria, and the recent horrible bombshell alleged by Hamza Al-Mustapha the former Chief Security Officer (CSO) to late General Sani Abacha on how “Boko Haram was a calculated game”, in connivance with some privileged animals for sabotage and stealing, there could perhaps be more dangerous thieves and dreaded criminals in PDP and APC than one could find on the streets of Nigeria.

With results of governance in Nigeria since 1999 those in authority have constantly abused their privileges and bullied average citizens, denied them basic human amenities and impoverished them. PDP and APC are the same in character – corrupt, selfish and ineffective. Members of these two parties have often without any iota of shame switched parties whenever they considered such politically convenient for their selfish interests. Some of them have even gone in and out of these two parties more than twice. The common characteristics almost all of them exhibit when they change parties are unpleasant commentaries and derogatory words of describing the party they left as evil and lacking internal democracy, but still greedily and shamelessly go back to eat their vomits by joining the same party they may have equated to devil or labeled as dictatorial. Their business of corruption flourishes only in states of ambiguity and uncertainty, and when there is none they create it because through the nostril of brouhaha and confused atmosphere their evil of corruption and looting survive, and conspiracy of silence condoned by gullible minds. Anyone who is very civilized and approach issues differently cannot coexist in harmony with them.

Events of mismanagement and poor quality leadership in Nigeria illustrate that common identities of those in authority from these two parties that have heartlessly, brutally, selfishly and corruptly tormented and dealt with Nigerians are hypocrisies, insincerities and nonexistence of patriotism while paying lip services to “nation building”. They are so arrogant, and believe that they could be in elected positions without our votes since they could – like always – take advantage of the poverty they subjected us to and use their questionable wealth to influence results. These people do not know fairness and compassion. All they want is just power to intimidate, manipulate and enrich themselves, their families and cronies. They show no respect to the rule of law, and we are worthless before them. Their lack of vision, qualitative leadership and greed are killing the hopes, dreams and aspirations of our youths. How long shall we continue in this state of obscurity, and tolerate this evil? It does not matter whether it is umbrella or broom the results at the national level have always been the same looting, injustice, stealing and suppression. But there is an appointed time for everything, and APC and PDP know that the time of playing chess with the future of Nigerians is over. Peter Obi’s candidacy through Labour Party has presented a better alternative to Nigerians, and most of us now avoid broom and umbrella like one avoids leprosy.

What is then actually the difference between PDP and APC?

There is absolutely no distinction between PDP and APC except name – otherwise it is the same content. The explicit fact again is that APC smartly inflicted injuries on PDP and schemed the party out in its own game in 2015 and maintained it in 2019. Members of PDP are bitter over the situation and they are not finding it funny. Succinctly, APC denied PDP access to national treasury, and PDP desperately wants to retrieve it back and continue where it stopped. APC being the tragedy that replaced the calamity called PDP is currently in charge of affairs in Nigeria of increased killings, poverty, bribery and corruption also wants to maintain the status quo ofjuicy breakfast, expensive launch, appetizing dinner and luxurious holidays for its members at the expense of equally millions of the Nigerian masses who gnash their teeth in hunger and starvation.

Objective and critical analyses show that these two parties since 1999 have destroyed morality, patriotism and encouraged looting and corruption in Nigeria. One of the effects of this abuse of privileges and rascality of power by these desperadoes is the destruction of the psyche of the Nigerian youths into believing that money is everything, and how one gets the money does not matter. Any Nigerian still talking about these toxic parties called PDP and APC of producing the next president in 2023 with the same set of people that kept us in this horrible, pitiable and shameful condition since 1999 must be a beneficiary of our collective pain and agony. Be that as it may, take this message to them as a note of warning, and let it be loudly and clearly said to their hearing that we Nigerians are tenacious against the old politics of selection and imposition. We are resolute to take back Nigeria in 2023, and no amount of intimidation and bribery against our aspiration of having a qualitative leadership and blackmail against Peter Obi will force majority of us into “hanky-panky” game of “reinforcing failure”.

Umbrella has failed to shed us from rain, and broom is clearly too old, breaks and sweeps nothing. Therefore, PDP and APC are just two different parties but the same content of failure. They have nothing to offer. Forget their manifestoes, they are the same content of lies and deceit since 1999. We have had enough. Our focus of liberation now is on Peter Obi, for in him our hope of a new Nigeria and a normal working society beckons.

RELATED POSTS:  Why Nigeria Needs to Elect an Igbo President in 2023 - Prof. Farooq A. Kperogi