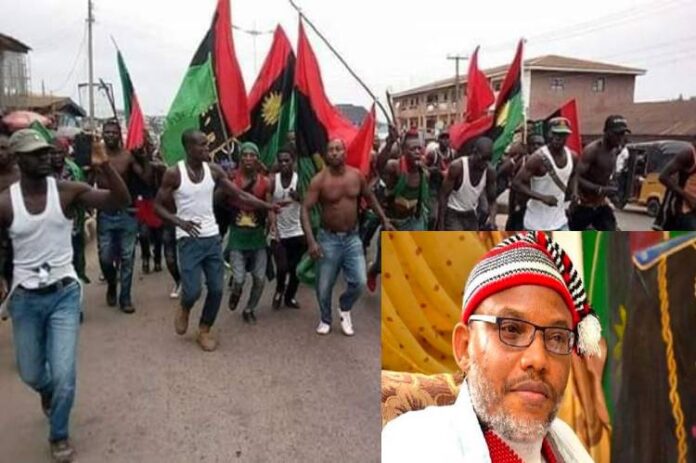 Against clear provisions of the Nigerian laws including the Chapter Four of the 1999 Constitution, the Criminal and the Penal Code Acts of 2004 and the civil and criminal procedure rules and laws including the Administration of Criminal Justice Act of 2015 as well as the regional and international human rights and humanitarian treaty laws particularly the int’l rules of engagement guiding the peacetime and the conflict situation security operations, the Nigerian security forces particularly the Army and various ‘special forces’ of the Nigeria Police Force have jointly been responsible for the unlawful death of no fewer than 1,300 mostly defenseless and unarmed citizens of Eastern Nigeria between August 2015 and Sept 2017; and between August and October/Nov 2020 as well as January to Sept 2021; totaling a period of five years. Most of the victims are Igbo citizens.

Breakdown of the 1,300 Deaths: The breakdown of the above indicates that not less than 480 were killed between 30th August 2015 and 15th Sept 2017. However, between Oct 2017 and July 2020, no major direct killings, other than mass arrests, abductions and scores of secret deaths were recorded. Between August and Oct 2020, over 100 unarmed and defenseless citizens were shot and killed including over 30 victims of Emene Enugu Army massacre and over 70 victims of the EndSARS protests in Anambra, Abia, Imo, Enugu, Ebonyi, Rivers, Delta and Cross River States. Between 21st Oct and Nov 2020, over 110 defenseless and unarmed Igbo citizens were killed during the Obigbo Army massacre and abductions in Rivers State and between January 2021 and 14th Sept 2021, not less than 560 citizens, mostly unarmed and defenseless Igbo citizens were killed. Out of the number, less than 10% or 50 were independently found to be members of the armed Eastern Security Network and out of the 50 killed, over 60% were killed outside the law or shot and killed while unarmed. The number of the 1,300 direct victims of the Nigerian security forces attacks and killings includes 50 added ‘dark figures’.

600 Igbo Citizens Hacked To Death By Jihadist Herdsmen Since April 2016: At the non state actor level, Jihadist Fulani Herdsmen are also found to be responsible for hacking to death of over 600 native Igbo Christians in Eastern Nigeria. The Jihadist Herdsmen killings across Igbo Nation had started in April 2016 when the first confirmed massacre took place at Nimbo in Uzo-Uwani in Enugu State, killing at least 48. That is to say that between April 2016 and Dec 2020, not less than 400 native Igbo Christians were hacked to death by the Government protected pastoral jihadists perpetrated under the deceitful cover of “rain forest rural cattle grazing”. In the past eight months and a half of 2021 or 1st January to 14th Sept, not less than 200 Igbo Christians have been hacked to death by the Jihadists and till this date, not even one killer herdsman has been arrested and brought to book by the security forces. Among the 600 deaths were scores of Christian clergies including Catholic seminarians, nuns and priests as well as Pentecostal pastors. Several hundreds of Igbo citizens including travelers and other road users, farmers, clergies, traditional rulers, businessmen and others have also been abducted and either killed or rescued after payment of huge ransom sums.

Security Forces Injured 1,500, Unlawfully Arrested 10,000, Disappeared 3000 and Caused Indirect Deaths Of Thousands: The Nigerian security forces are also responsible for indirect death of thousands arising from injuries and inadequate or lack of proper medication or medical attention, or hunger and abandonment or neglects by the authorities. Other causes include torture and untreated injuries or starvation; or deaths by enforced disappearances or secret killings in security custody or captivity. In the same killing and maiming period, or past five years, not less than 1,500 were shot and terminally injured, out of which, several have been crippled for life. In six years or between August 2015 and Sept 2021, over 10,000 unarmed and defenseless citizens were unlawfully arrested by security forces and taken into custody where they were treated inhumanly including being subjected to torture, starvation and solitary confinement. Between January 2021 and August 2021 alone, over 3,350 were unlawfully arrested and 850 disappeared and in all, out of over 10,000 unlawful arrestees, over 3000 were disappeared and their whereabouts have remained unknown or unaccounted for till date.

No Convictions Secured Since 2015: The inability of the Nigerian Government to secure a single court conviction against any of the over 10,000 unlawfully arrested citizens of Eastern Nigeria in the past six years or August 2015 to Sept 2021 has been as a result of false and hateful labeling and criminal categorization of civil infractions and ‘simple offenses’ or ‘misdemeanors’ into ‘high treasons’ as well as reckless resort to ‘prosecutorial vindictiveness’. To secure a judicial conviction against a citizen especially where ‘high treason’ like “terrorism” or “terrorism financing” or “treason” or “treasonable felony” or “premeditated homicide” or “abduction” (kidnapping) or “insurrection” or “arson” is maliciously and hatefully alleged, it strongly requires investigative and prosecutorial answers to when, why, where and how of the crime alleged to have been perpetrated plus statistical indices of same. To secure conviction, therefore, all of the above must be fully met and satisfied the trial judicial officer and his trial Court. It is as a result of the inability of the Government of Nigeria to provide all of the above that has made it impossible for the Government to secure a single conviction against any of the over 10,000 unlawfully arrested unarmed and defenseless Igbo citizens in Eastern Nigeria. Nigerian Government’s reckless resort to hate and false labeling and prosecutorial vindictiveness is clearly as a result of its pre-prosecutorial knowledge of the impossibility of securing conviction on account of the bogus allegations and phantom and trumped up charges. Therefore, apart from reckless resort to ‘prosecutorial vindictiveness’, the Nigerian Government has also resorted to extrajudicial and jungle justice by indiscriminately abducting, killing, maiming, disappearing or detaining the arrested citizens indefinitely using endless renewable or non renewable court remand orders.

Dates And Places Of Killings By Nigerian Security Forces Since 2015: The Nigerian security forces particularly soldiers of the Nigerian Army and Nigeria Police Force ‘special squads’ have since August 2015 till date perpetrated the following massacres in Igbo held areas of Eastern Nigeria: (1) the 30th August 2015 killing of 40 defenseless and unarmed citizens during peaceful protests in Onitsha, Enugu, Yenagoa, Uyo, Port Harcourt and Asaba; (2) 2nd and 17th Dec 2015 killing of 30 citizens in Onitsha; (3) 18th and 29th Jan 2016 killing of 20 citizens during peaceful protests in Aba; (4) 9th Feb 2016 killing of 30 citizens in Aba; (5) 29th and 30th May 2016 killing of 140 defenseless citizens during global Igbo Heroes Day in Onitsha and Nkpor (110 deaths) and Asaba (30 deaths); (6) 20th Jan 2017 killing of 20 unarmed protesters (pro-Trump rally) in Port Harcourt; (7) 11th to 14th Sept 2017 killing of over 180 unarmed and defenseless citizens of in Abia State, comprising: Afara-Ukwu 105 deaths, Isiala-Ngwa 25 deaths and Aba/Ogwe/Asa 50 deaths; (8) 23rd August 2020 Army massacre of over 30 worshippers and sports activists in Emene, Enugu State; (9) Oct 2020 massacre by Army/Police of over 70 unarmed citizens in Anambra, Abia, Enugu, Ebonyi, Imo, Delta, Rivers and Cross River States during EndSARS protests; (10) Oct/Nov 2020 massacre by Army of 110 defenseless Obigbo residents and abduction of over 550 others during Army invasion of that part of Rivers State; and (11) killing in eight months and a half of 2021 or 1st January to 14th Sept 2021 of not less than 560 mostly defenseless and unarmed citizens of Eastern Nigeria by security forces, maiming and torture of several hundreds of them, unlawful arrest of over 3400 and disappearance of over 850.

Butchers And Mass Murderers Must Not Escape Justice: Finally, as we remember those violently and unlawfully departed in Eastern Nigeria by security forces, perpetrated with utter hatred and impunity, the conscientous Igbos and all the people of courage and goodwill must remember that the state actor perpetrators responsible for the butcheries and mass murders are still walking the streets of the country freely and with impunity. Although several of them have become walking corpses or shadows of themselves, yet they must be pursued tirelessly and generationally both in spirits and humans until they roundly pay for horendous atrocity crimes they perpetrated. This is more so when Intersociety and others have identified, profiled and archived at least 50 of them since 2015 including Buratai, Attahiru, Abubakar, Solomon Arase, Musa Daura, Ibrahim Kpotum Idris, John Enenche, Sagir Musa, Habila Joshak, Obiano, Ikpeazu, Umahi, Lasisi Adegboye, Hosea Karma, Abutu Yaro, and so on and going by Nigerian Government’s ‘inability and unwillingness’ to hold them accountable, contrary to the int’l criminal law and ICC Statute’s ‘Principles of Complementarity and No Impunity’, these perpetrators are liable for all the perpetrated atrocity crimes at all times and beyond expiring dates-no matter how long it takes.

International Society for Civil Liberties and Rule of Law