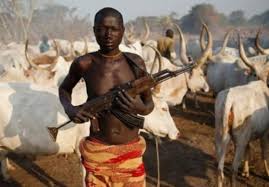 According to the account, it was gathered that the hunters were five in number, and were attacked by their assailants at a bush path near their village at about 7.00 pm last Wednesday.

It was further gathered that four of the five hunters were killed by the unknown gunmen while one of them who managed to escape ran back to the village to inform members of the community about the incident.

“About five victims of the attack were coming from Ilorin to Faje village on two motorcycles on Wednesday night. Before the people could get to the village, herdsmen attacked them at about 7:00 pm. The names of the deceased are Muri, Laide, and Segun. Two of the victims are of the same parents.

“One of the motorcycles used by the attackers was recovered by the members of the vigilance team and had been deposited at the Otte Divisional Police station,” a source in the community revealed.

He said the Command has commenced investigation into the matter while efforts were on top gear to arrest the perpetrators of the dastardly act.