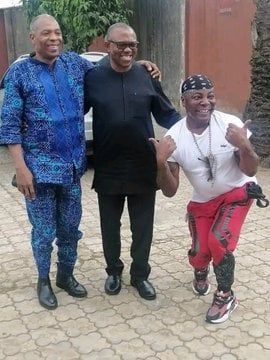 Mr Peter Obi, the Labour Party presidential candidate, has assured Femi Kuti, son of Afrobeat legend, that his ‘Obidient movement’ will base its campaign on issues rather than personality attacks, NjenjeMediaNews reports.

Obi said that his campaign would be based on everyday issues affecting Nigerians and Nigeria, insisting that the recent controversy was not what the movement and his ambition stand for.

He gave the assurance when he visited Kuti, according to a video clip online.

This is coming less than a week after Kuti gave a reason his family would not support any of the top three presidential candidates: Asiwaju Tinubu, Atiku Abubakar and Obi in the 2023 election.

“I saw what my own brother, Femi, tweeted and I said no! That is not the future and the society we want to build.

“We will lead a campaign based on issues that affect Nigerians and that is what I encourage everybody to do,” Obi said while addressing Kuti in the video clip.

Meanwhile, others present during Obi’s meeting with Kuti include Charles Oputa, known better as Charly Boy, among others.

RELATED POSTS:  Nigerians Are Angry With Osinbajo For Keeping Quiet Over Twitter Ban