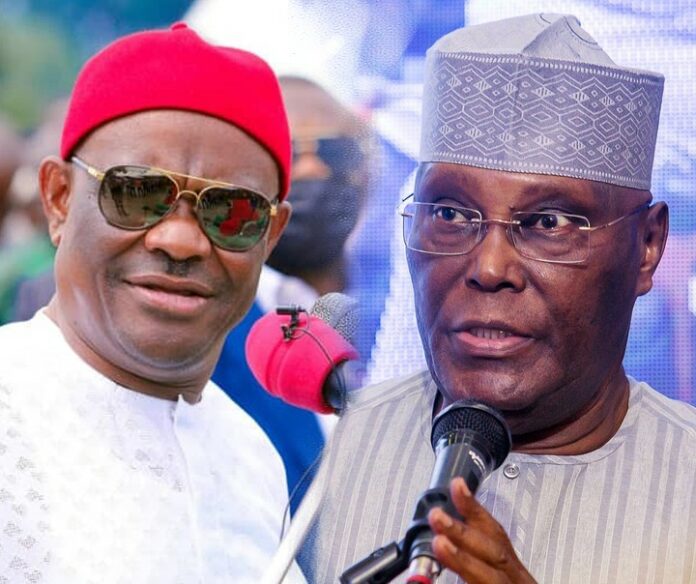 Rivers State governor, Nyesom Wike, has perfected arrangements to deliver the state’s votes to an opposition party in the 2023 presidential election, according to Daily Independent d.

Concerted efforts by stakeholders in the Peoples Democratic Party (PDP) to resolve the lingering crisis between Atiku Abubakar, the party’s presiden­tial candidate and Wike has failed to yield the desired results as the Rivers State governor and his allies have insisted that there would be no peace deal until the National Chairman of the party, Senator Iyorchia Ayu, resigned his position in honour of the agreement reached before he was elected. ­

The Atiku camp, however, wants Ayu to keep his job until the conclusion of the 2023 gen­eral elections, saying he can only resign if the PDP wins the presidential election, Njenje Media News reports.

Atiku on his part had said he had no powers to remove Ayu. He further said if he must be removed, due process must be followed in accordance with the party’s constitution.

Speaking further, the gover­nor revealed plans to increase the appointments of the spe­cial assistants on polling units from 50, 000 to 100, 000, saying he wasn’t bothered about crit­icisms.

Speaking with Daily Inde­pendent, an associate of the governor said aside creating employment for the newly ap­pointed SAs, Wike’s aim is to deliver “total votes in Rivers to any presidential candidate he pitches tent with”.

RELATED POSTS:  Wike: Stop Watering Your 2023 Ambition With the Blood of Igbo Youths

While ruling out possibility of a reconciliation with Atiku, the PDP chieftain who does not want his name in print said Wike cannot make peace with Atiku again since he has sided with Ayu and has embarked on his campaign without heeding his group’s demands.

Speaking further, he said Wike decided to appoint aides in all the polling units in the state after his opponents like Uche Secondus, Lee Maeba, Celestine Omehia and others vowed to deliver the state for Atiku.

He said with the appoint­ment of the 100,000 aides, Wike wants to prove that he is in total control of the political struc­tures in the state, adding that the SAs will be mandated to en­sure victory in their respective polling units.

He said, “The number one aim is job creation which the governor mentioned in his me­dia chat. But the ultimate aim is to ensure a total victory for whoever Governor Wike sup­ports in the presidential elec­tion. All the SAs must ensure they deliver their polling units.

“The implication is that with the appointment, Wike is already 100,000 votes ahead because all the appointees will vote for the presidential candi­date who the governor backs. If the appointees now deliver their respective polling units, then it’s total victory.

“One thing is clear, the gov­ernor will deliver the state to the opposition even though he has not formally given any in­struction to that effect. For now, any reconciliation between him and Atiku is completely ruled out.

“Not only did Atiku chose Okowa who betrayed him as running mate, all his other ap­pointments are from the North. Tambuwal who also betrayed Wike is appointed campaign DG. The Director of Field Op­erations, Umar Bature, is also from Sokoto. The national chairman of the party is also from North. Except Aniagwu who is from Delta, all the spokes­men are also from the North.

“When they sit down to take decisions, no Southerner is in­volved. One of Ayu’s children is also a deputy director in one of the units. One of his children was also given contract to ren­ovate the Peoples Democratic Institute (PDI). So everything is centred on the North and so there is no way they can get Wike’s support”.

Atiku’s project is already dead on arrival. He went to Kaduna and said Northerners should not vote for Yoruba or Igbo and then you want gover­nors like (Seyi) Makinde and (Okezie) Ikpeazu to tell their people to vote for you. That’s impossible”.

Governor Wike on Sunday claimed that Atiku Abubakar does not need him in his cam­paign for the 2023 presidential election and would as such not force himself on the candidate.

Wike made this assertion while speaking at the commis­sioning of the PDP governor­ship campaign office and the inauguration of the PDP cam­paign council in Port Harcourt on Monday.

Atiku’s pictures were con­spicuously missing on the party’s branded vehicles for campaigns for the 2023 general election in the state.

He also accused Atiku of appointing some members of the PDP in Rivers State into his campaign council without his (Wike) contribution.