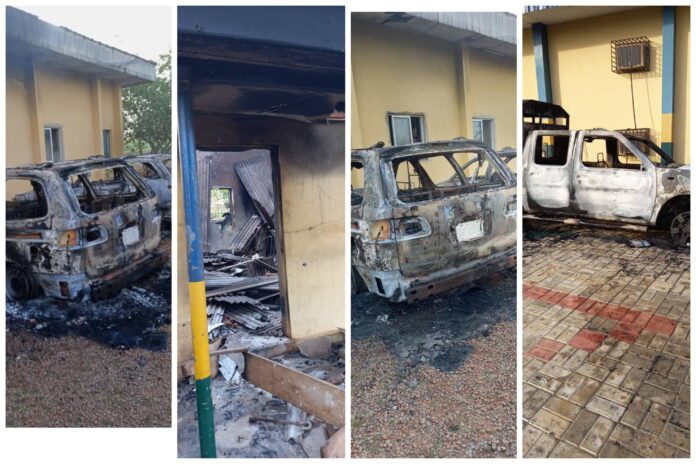 Criminals believed to be unknown Gunmen in the early hours of today burnt down the Uzuakoli Divisional Police station in Bende LGA of Abia state, and the Police Zonal Headquarters Zone 13 police command in Ukpo, Dunukofia LGA of Anambra, Njenje Media News can report.

The attacks appear well coordinated and seem to have happened simultaneously.

A source close to the area of the incident told Njenje Media News that the Uzuakoli Divisional Police station incident happened around 2:00 AM today. In his words, “the gunmen attacked, freed inmates in the station and burnt the building before leaving. He, however, noted that no lives were lost.

The circumstances behind the attacks are not yet clear, but according to a report by TheNation, no fewer than 2 Policemen lost their lives during the attack and vehicles destroyed.

In the case of the Police Zonal Headquarters, Zone 13 police command in Ukpo, Njenje Media News learnt that two police officers lost their lives and many vehicles were destroyed in that incident.

A video obtained by Njenje Media News recorded by a police officer on duty at the zonal headquarters showed the administrative building of the headquarters going up in flames as a result of the attack.

Njenje Media News recalls, that earlier this month, a similar attack was launched by the same unknown gun in the southeastern city of Owerri after blasting their way in with explosives, where over 1800 inmates were released.

Jailed Professor Rigged Election For PDP, Not Me – Godswill Akpabio