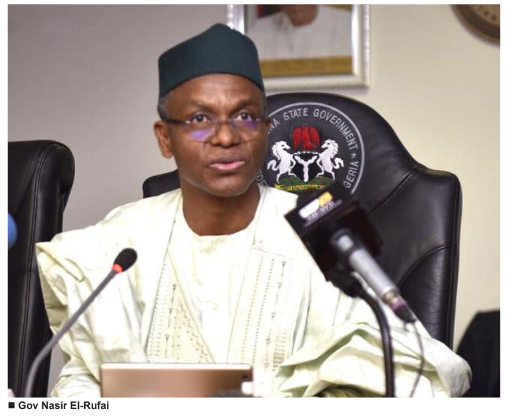 The Governor of Kaduna State, Nasir El-Rufai has explained why his government is planning to downsize the work force in the state, Njenje Media News reports.

The governor made this known in a media chat with some Kaduna-based broadcast journalists at Sir Kashim Ibrahim House.

According to him, his government since inception in 2015 had planned to fight waste and make sure government resources serve the majority of the citizens and not just few people working in the public service.
This is opined led to the verification of the workers payroll to weed out ghost workers.

“We also decried a situation where most public funds went into paying the wages of less than 100,000 public servants in a state with close to 10 million people. Those who work must be paid, but the people of the state must also be served by their government.”

Speaking further, he said the verification is a continuous process.

On the major reason for the downsizing, he said:

“Due to the serious problems affecting our national economy, our state finances are stretched by salaries.”

“What we receive from FAAC can barely pay salaries and overheads. In November 2020, we had only N162.9m left after paying salaries. That month, Kaduna State got N4.83bn from FAAC and paid N4.66bn as wages. In the last six months, personnel costs account for between 84.97% and 96.63% of our FAAC revenues. In March 2021, the state had only N321m left after settling personnel costs. We got N4.819bn from FAAC and paid out N4.498bn, representing 93% of the money we received.”

“We were elected to develop the state, not just to pay the salaries of public servants. We were elected to promote equality of opportunity, to build and run schools and hospitals, upgrade infrastructure and make the state attractive to the private sector for jobs and investments.”

“Therefore, we have to shed weight and reduce the size of the public service. It is a painful but necessary step to take, for the sake of the majority of the people of this state. Covid-19 has shown clearly that the public service requires much fewer persons than it currently employs. The public service is an important institution, and it should maintain only an optimum size. Faced with a difficult situation, we cannot refuse to act or resort to sentiment”, he said.

The Suppliers Of Bad Governance Will Adjust When Citizens Act Collectively...